The New Orleans Police Department has released photos of suspects in a rash of package thefts in the Milan neighborhood. Most occurred in early December on Milan Street near South Saratoga. 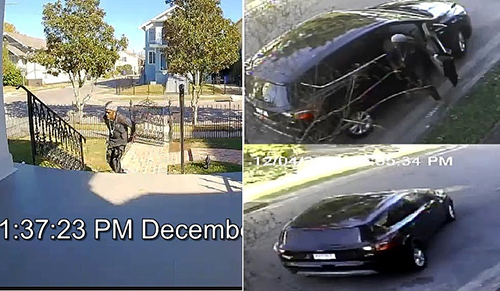 The NOPD is requesting assistance in locating and identifying the above suspect sought in the investigation of a package theft that occurred on Dec. 4.

At about 1:36 p.m., the above pictured vehicle parked within the 4200 block of South Saratoga Street, near Milan Street. The pictured suspectt then exited the passenger side of the vehicle and proceeded to steal two packages from the porch of a residence in the 2100 block of Milan St. The subject then walked to a house in the 2000 block Milan St and stole five packages from the porch, which had a combined value of $350.

The suspect is identified as a black male with a thin build and brown complexion, standing between 5’10”-6’0” wearing a grey knit cap, black collared shirt, black pants and tan boots. The suspect was observed exiting the passenger side of a black late-model SUV, possibly a Jeep Cherokee, with an unknown paper license plate that could possibly be a dealer advertisement placard or a Texas temporary license plate. 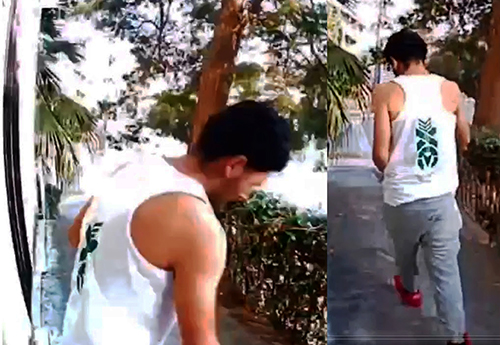 The NOPD is seeking a suspect involved in another theft incident that occurred on Dec. 6.

At  3:47 p.m., surveillance cameras captured the pictured suspect allegedly stealing a package off the front porch of a home located in the 2100 block of Milan Street. The subject fled south on Milan to an unknown location.

The subject was wearing gray pants, a white tank top with a green “XC” graphic printed on the back, and red high top tennis shoes. 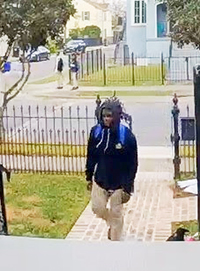 The NOPD is requesting the public’s assistance in identifying and locating a subject involved in an investigation of theft that occurred on Dec. 9.

At around 3:53 p.m., the suspect pictured at the right entered the yard of a home in the 2000 block of Milan Street. Two packages were removed from the homeowner’s porch. Afterward, the suspect left the porch and rejoined a group of four additional juveniles.

Anyone with information regarding these incidents or the identity and whereabouts of the suspects is asked to contact Sixth District detectives at 504-658-6060, or to call anonymously to Crimestoppers).

Another porch theft was reported blocks away on the other side of Napoleon Avenue. NOPD officers are searching for a suspect seen on surveillance video during a theft in the 2200 block of Jena Street.

The victim told police a package was delivered to his residence at 1:58 p.m. on Dec. 6. The victim reviewed surveillance video of this incident and observed an unknown black male, wearing a white shirt, blue jeans and brown shoes, approach his front porch and remove a package before fleeing the scene.

Anyone with information regarding the identity and whereabouts of the pictured suspect is asked to contact Second District detectives at 504-658-6020. Citizens with information that can help solve crimes are asked to call Crimestoppers at 504-822-1111.