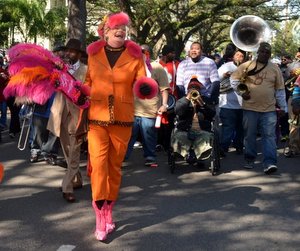 Princess Lydia Benson struts her stuff with the Lady Rollers in 2013. (Kim Welsh)

The Lady and Men Rollers Social Aid and Pleasure Club is holding its annual second-line on Sunday afternoon. The parade will feature The Truth Brass Band.

The club, headed by Linda “The YakaMein Lady” Green, will second-line from 1 to 5 p.m. Lineup is at 12:45 p.m. at St. Charles Avenue and Washington.

Traffic will be restricted along the route described below. Expect road closures and traffic delays during the second-line.