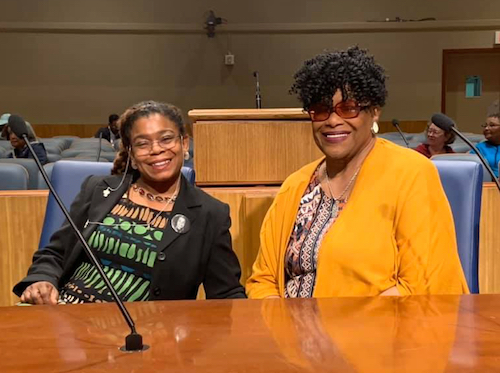 One of the most impactful cultural institutions in New Orleans will welcome a new leader as a community pioneer retires. Ashé Cultural Arts Center co-founder Carol Bebelle is leaving her executive director position, which she has held since its inception.

The New Orleans City Council began their Dec. 5 meeting by honoring Bebelle as well as the center’s positive impact on community and culture via Oretha Castle Haley Boulevard.

“This is a moment of extreme pride for us as we honor Carol Bebelle for her 21 years of leadership at Ashé Cultural Arts Center,” said Ashé Board President Beverly Andry at the meeting.

The building that houses Ashé has been a fixture on Oretha Castle Haley since 1904, according to the Preservation Resource Center. After lying vacant for several decades, the space was restored in 1998, the year Bebelle and Douglas Redd founded the Ashé Cultural Center.

Ashé moved in as a tenant by the end of 1998, purchased the property in 2007, and developed 29 residential units on the building’s upper floors by 2009.

“She brought her determination to an area that has historical significance to the African-American community,” Andry continued. “She created a place in Central City to highlight the role that African Americans have played in developing the important culture of New Orleans.”

The Ashé mission is to use art and culture to foster community and economic development, Andry said. She lauded Bebelle’s work in building relationships that expand past the boundaries of New Orleans, promoting the culture of New Orleans neighborhoods in communities across the United States and beyond, in Africa, Asia and Europe.

“Those outside of our state have stood strong in being able to invest in what we’re doing,” Bebelle said at the City Council meeting, “and we’re hoping that more folks at the local level will look at the work we’re doing and make a choice to make investments.” 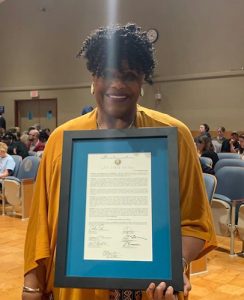 Bebelle, who also goes by Akua Wambui, is a native New Orleanian and a proud product of the New Orleans public school system, according to the Ashé website. She received her undergraduate degree from Loyola University in sociology, and her master’s degree from Tulane University in education administration. She spent nearly 20 years in the public sector as an administrator and planner of education, social, cultural, and health programs.

Bebelle is also a published poet and writer, including a book of original poetry, “In a Manner of Speaking.” Before founding Ashé with Redd, a visual artist, the two collaborated on a dance and theater adaptation of “The Origin of Life on Earth/An African Creation Myth.”

“There is something that we have derived that is really valuable. It’s not available everywhere—in fact, it’s only available here,” Bebelle told City Council members. “If I can urge you to do anything as an acknowledgement is to be able to keep culture always in your mind and a part of the ingredient that you’re looking at when you’re putting up your lenses—doing all the deliberating that I know has to be some of the hardest stuff that you have to do—that there is a way in which that if we do not take good care of what it is that we have, by the time we discover that we’ve lost it, it’ll be too late to capture it back.”

Bebelle, who will retire at the end of December, is passing the torch to Asali DeVan Ecclesiastes, who will take over as executive director on Jan. 1, 2020.

“She is a fabulous and dynamic young community developer and artist,” Bebelle said of Ecclesiastes. “I’m hoping our model of being able to allow things to grow and then to let go will be one that can work not just for us at Ashé but in other places as well. We’re at a time in our community and in our country where it’s so important for us to be paying a lot more attention to culture than we really are.”

Councilman Jay Banks called Ashé “an economic and cultural flagship for New Orleans and Louisiana.” Bebelle said she is confident the organization will continue to flourish.

“We’re looking forward to another 20 years with Asali at the helm, and I know that she’s a steady driver,” she said. “People have told her that she has big shoes to fill, but I tell people she’s got wings on her heels, so we don’t have to worry about the shoes.”