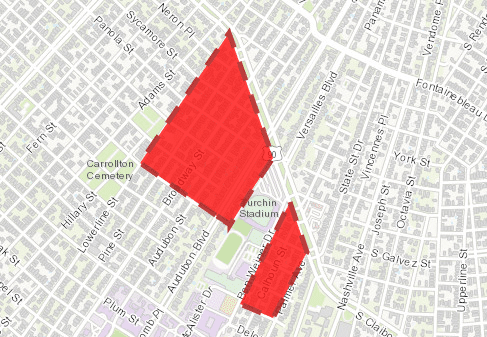 Areas affected by the boil water advisory. (Sewerage & Water Board)

While responding to a water main break near South Johnson and Calhoun streets by closing valves, the Sewerage & Water Board of New Orleans detected low water pressure. Therefore, this utility issued a precautionary boil water advisory for several blocks Uptown.

On Friday night, residents in the area reported they were getting no water at all. After speaking with the S&WB, Councilman Joe Giarrusso reported Saturday morning: “The primary break was isolated late last night. S&WB is still trying to determine extent of problem and when water will be restored. Should have more details later this morning.”

The boundaries of the impacted areas are as follows:

• Properties along Calhoun and Palmer Avenue between South Claiborne Avenue and Story Street, including the dead-end blocks of South Johnson, South Prieur and Barret Street.

Tulane University and its stadium are not included in the boil water advisory areas at this time. Customers in other areas of the city are not affected and do not need to boil their water.

As the S&WB responded to the break in a 30-inch water main under South Johnson, crews worked to close valves to shut off water to the damaged section of pipe. While actively monitoring pressure at hydrants in the area, water pressure below the state limit of 20 pounds per square inch (psi) was detected in some locations.

The S&WB issued this advisory for the properties closest to the sites of the low water pressure readings.

“This is an evolving situation, and we will continue to monitor pressure in the area,” the S&WB states in a press release. “We will deliver updates as new information becomes available.”