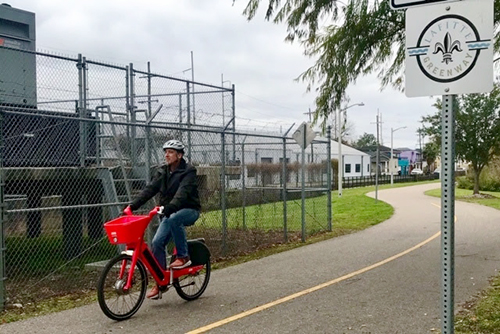 Red demo versions of the Jump e-bikes have been used around town, but these bikes, when put into service, will be blue.They feature an e-assist that provides a boost of up to 20 mph every time you pedal. (via the Mayor’s Office)

On the second anniversary of the city’s Blue Bikes program, Mayor LaToya Cantrell announced expansion of the bike-share service to include more Uptown locations. The city also plans to replace its fleet with electric bikes, Cantrell announced.

Blue Bikes will be expanding in the Uptown, Riverbend, Carrollton, Broadmoor, Gert Town and Central City neighborhoods. More bike service is also planned for Algiers and the 7th Ward.

“While everyone rides for different reasons, the system mirrors our city, and bikes are located in a growing number of neighborhoods to meet different needs — from City Park to the CBD to the French Quarter to Central City,” Cantrell said. “In 2020, we look forward to bringing more, upgraded bikes, to deliver this new transportation option to more of our residents.”

In 2020, Blue Bikes will expand its service area to give more people access — including students at Xavier University, Dillard University, Loyola University and Tulane University — while allowing current riders to leverage the pedal-assist in traveling to more parts of the city. At the same time, the city is cancelling its reduced-cost program for college students.

Another 200 bikes will be added to the fleet, beginning in January, bringing the total to 900. Eventually all the bikes will be replaced with e-bikes.

The new Jump Blue Bikes, a higher-tech fleet owned by Uber, feature an e-assist that provides a boost of up to 20 mph, which makes biking more accessible to a wider range of people with different abilities and ages while being used for longer distances. Red-colored demo versions of these bikes have been used around town, but these bikes, when put into service, will remain the color of blue.

The monthly cost $20 a month will increased to $30 a month. The cost for low-income riders who receive public assistance for food or health care will stay the same, at $20 annually.

Jump has seen e-bikes generate more than twice as much usage as pedal-only bike share, and Jump e-bike trips average 200-300 percent longer than traditional bike share trips, according to the Mayor’s Office.

The system includes a Jump mobile app and the ability to rent bikes directly through the Uber app, since Blue Bikes and Jump joined the Uber family last year.

“With more modes of transportation in one place at their fingertips, it becomes even easier to get around without a car,” a Mayor’s Office press release states. Riders with an existing Uber account can log into the new app, or they can create a new account after downloading the Jump or Uber apps.

Jump e-bikes and scooters are now in nearly 30 cities globally, where the same app can be used. Visitors from London, Berlin, San Francisco, Austin and other cities will be able to seamlessly ride Blue Bikes when visiting New Orleans. And when local riders travel to those cities, they can use bike-share as they can when at home in New Orleans.

“Over the last two years, we’ve introduced more and more people in the city to bike-share, and I am thrilled that all of our dedicated riders will soon experience the benefits of e-bikes — getting across town faster without breaking a sweat,” Coats said.