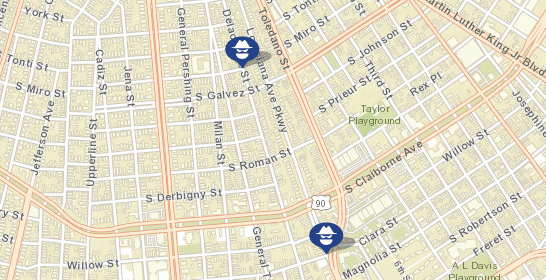 Two robberies were reported Thursday on Uptown streets. The first occurred just before 11 a.m. in the 2800 block of Louisiana Avenue, near Claiborne Avenue in the Freret area, and the second occurred around 6 p.m. in Broadmoor.

In the first incident, a 47-year-old man was sitting in his car on Louisiana when a man approached holding a firearm. He demanded money, and the victim turned over his cash. The gunman ran off on Clara Street with the money.

In the second, the victim, a 23-year-old man, was walking on Delachaise and South Miro streets when he was approached from behind by a man who took his wallet and fled toward South Broad. The robber is described as a black male, about 6 feet with a medium build, wearing a red or green hooded jacket and dark pants, possibly with braces on his teeth.