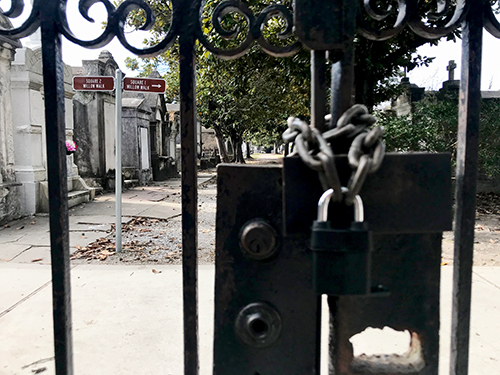 A locked gate is at Lafayette Cemetery No. 1’s entrance on Washington Avenue. The historic cemetery has been closed since September. (Nicholas Reimann)

Tourists flocking to what’s become one of the Garden District’s most popular destinations are met with is just a padlock and a sign: “Lafayette Cemetery #1 will be temporarily closed for repairs.”

It’s been over two months since the city of New Orleans, which owns the cemetery, shut down the area for public access, as it performs the most extensive restoration effort in recent history on the site, which has graves dating back to the 1830s.

The city says that work there is long overdue, with natural weathering and a massive spike in tourist interest taking a toll on the historic tombs.

That work so far has been scarce, though, according to Martin Leblanc, who says the tour groups he leads there will regularly consider the site among the top three or four to visit in the city.

“I think they’re going to finish this cemetery after they finish the streets in New Orleans,” he said. “We haven’t seen any work.”

Martha Griset, who’s overseeing the work with city Property Management, said the city has spent time evaluating how to move forward on the restoration, and has already done some work clearing plant debris.

The project’s main goal is restoring tombs and walkways, and making sure those are sustainable in the future. An exact timetable hasn’t been worked out yet, but Griset said the project will likely be a matter of months rather than something that will drag on for years.

Leblanc said the work can’t be finished soon enough for his or other businesses in the area, which he said have taken a serious hit. Crowds this year haven’t recovered at all from their summer lows, Leblanc said, placing the blame on the cemetery’s closure. 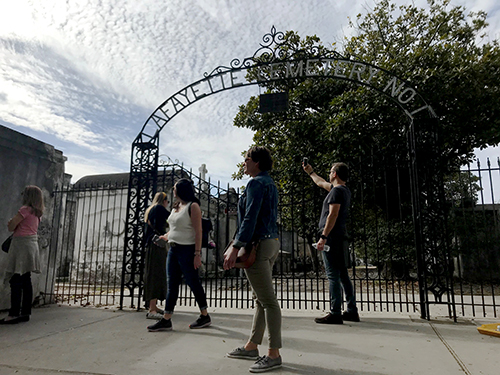 Tourists gather what views they can of the closed Lafayette Cemetery #1 at its Washington Avenue entrance. The historic cemetery has been closed since September. (Nicholas Reimann)

Tourism at the cemetery has increased around 15-fold over the past two decades, bringing in an average of about 200 visitors per day in 1997 to around 3,000 visitors per day recently, according to city spokesman David Lee Simmons.

Over those years, the cemetery suffered from years of city neglect, Griset said, leading to the decision to perform the largest revitalization attempt since at least the 1960s.

Simmons said that work’s necessary to keep the cemetery viable in the future, adding that although there may be some frustrations now, it’s necessary that the city take time to get things right.

“We’re talking about a very fragile area in a historic neighborhood,” he said.

On the National Register of Historic Places in 1972, Lafayette No. 1 has twice appeared in the World Monuments Fund’s “watch” list because of the dilapidated state of some tombs.

Michele Diboll, who owns a tomb in the cemetery, said she doesn’t see the reason for the city’s timing — much less closing off the entire space while so little work has been done so far.

“That’s just completely unprofessional and a little bit disturbing that they closed down this big tourist destination,” said Diboll, who regularly visited her father’s tomb before the cemetery was closed. “I don’t know now why all of a sudden the city thinks something needs to be done.”

She also criticized what’s been a lack of communication on the part of the city, which announced the closure in a news release sent on Friday, Sept. 6 — just three days before the site closed on Monday, Sept. 9.

In that news release, the city said it would be doing work like structural repair of a brick wall, drainage improvements and removing magnolia trees.

That last point has become particularly contentious, with Diboll saying the trees provide shade, making the cemetery “a beautiful place to walk.”

The city hasn’t yet decided on an exact plan on the trees’ future, as Simmons said it’s a “real delicate walk trying to maintain the pristine beauty that’s there but not having it disrupting a pretty fragile system there.”

The shallow, aggressive root system of the magnolia trees is a serious threat to the tombs, he added.

Diboll said she just wishes the city were more clear about its plans for the trees and the rest of the cemetery, especially with family coming in for the holidays that may want to visit her father. 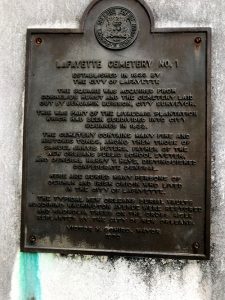 A plaque near the Washington Avenue entrance states the history of Lafayette Cemetery No. 1 . (Nicholas Reimann)

Shanna Hudson-Stowe, board president for preservationist group Save Our Cemeteries, said her group also hasn’t been involved with any city efforts.

“We can’t form any kind of opinion until we know what they’re doing,” Hudson-Stowe said. “The only thing I can really say for sure if that we appreciate that the city is concerned about Lafayette No. 1.”

Nancy Adams, 77, said she also hasn’t been able to visit her late husband’s tomb since the cemetery was closed to the public, which brings up bigger concerns going forward.

“Well, I would be concerned if I have to do a burial,” she said. “I don’t know how that’s going to happen.”

In that situation, Griset said, a tomb owner would just need to contact Property Management to set up an arrangement.

As for the cemetery now, tour guide Leblanc continues to entertain visitors at the gate, even if those tourists can’t wander around inside.

“There’s a lot of people that continue to come to this area of the city to, you know, be a part of the history of New Orleans,” he said.

One of those visitors was Grant Brown, a tourist from California.

He was dropped off right in front of the Washington Avenue gate, specifically to see the cemetery, just based off a recommendation. He didn’t know anything about the history, and saw a locked gate.

“To be honest I actually didn’t know what was in there or not,” he said while walking off.