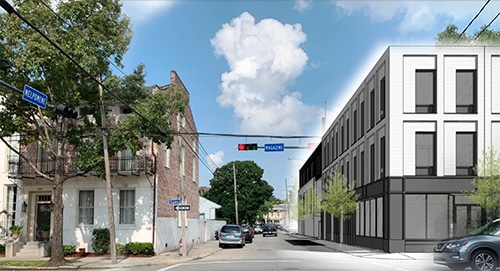 A rendering shows how the proposed office complex would look on Magazine and Melpomene. (EskewDumezRipple)

The monthly board meeting of the Lower Garden District Association on Monday featured a presentation on plans for a new office and retail building at 1335 Magazine St.

The three-story building will include features such as meditation areas, a library, co-working space and a two-level terrace — making it stand out as a modern office building. “When you enter this courtyard, the idea is for it to feel like a spa,” said Patrick Schindler, president of Felicity Property Co., the real estate firm behind the project.

But while the presenters promised that the space would be Zen, some audience members at the meeting seemed to think of the building plan was just Zzzz.

“It does look square and boxy,” one member of the audience commented during the question-and-answer period.

“It needs to have some personality,” another man added.  And one woman simply said: “Honey, this is boring.”

A rendering of the building as seen from Magazine Street. (EskewDumezRipple)

The presenters welcomed the feedback and said that they would consider it carefully as building plans continued to evolve.

“We want the neighborhood to appreciate the design,” said project architect Hussein Alayyan, with the firm EskewDumezRipple.

The presenters did get positive feedback on the fact that the building would offer some office space outside of the Central Business District.

“The whole concept is a great idea – bringing people into the community, being able to walk to work,” commented one audience member.

The mix-use complex planned for a vacant lot on Magazine and Melpomene Street needs to go before the city’s Historic District Landmark Commission, as new construction in a historic district, and the City Planning Commission, as a development with about 50,000 square feet. After the commission hearings, it will need approval from City Council.

Felicity has other properties close by on Magazine, including an apartment building known as The Julian and a retail-office space dubbed Framework, whose tenants include Dirty Coast and Satsuma Cafe. EskewDumezRipple’s projects include the Louisiana State History Museum and Landry-Walker High School.

The complex is planned for a vacant lot on Magazine Street. (via City Planning Commission)