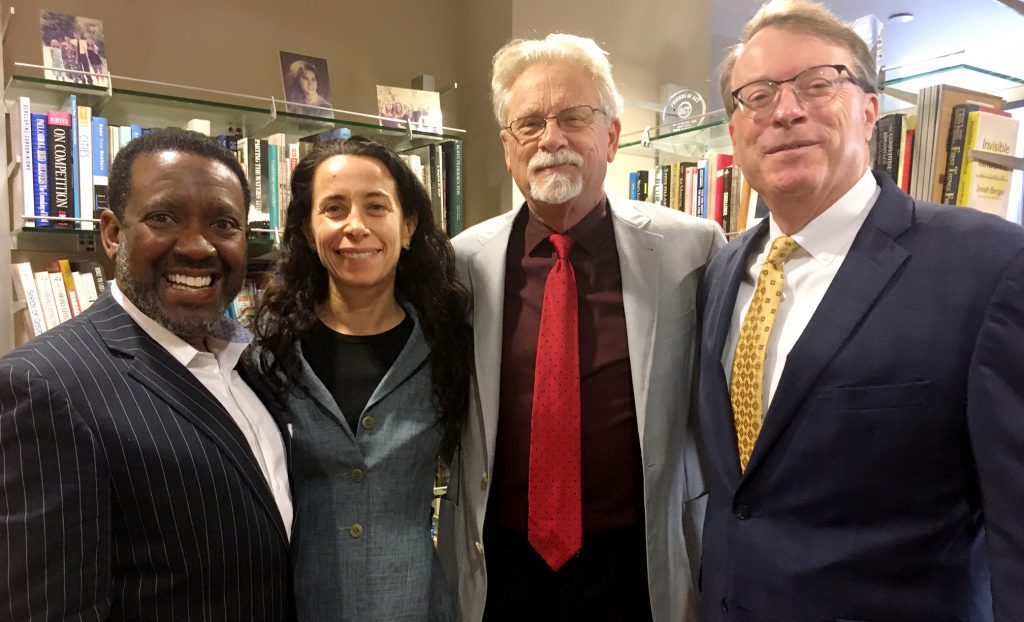 The volunteers at Court Watch NOLA are a well-oiled data collection machine that have made a significant impact on the operations of the Orleans Parish criminal court system for more than a decade. “We are a basic exercise in democracy,” said director Simone Levine. Through the information skilled volunteers collect, the agency publishes reports “that spur dialogue and bring much needed transparency and accountability to the courts.”

Founded after Hurricane Katrina by the New Orleans Business Council and other forward-thinking organizations, Court Watch NOLA seeks to shorten the gulf between “insiders” and “outsiders,” Levine explained.  Outsiders are the crime victims, witnesses, defendants and jurors. Insiders are the public officials who run the system, including the judges, prosecutors, defense attorneys, police officers and Sheriff’s Office officials.

“Court Watch NOLA teaches outsiders the language of court so that outsiders can bring accountability and help to solve some of the problems that insiders have so regularly lived with that they often no longer see as problematic,” Levine said.

For example, Louisiana has some of the highest rates in the country for gunshots, female homicide, wrongful conviction and incarceration. Court Watch NOLA has educated more than 1,000 volunteers who must undergo eight hours of legal training before they are allowed to monitor arraignments or trials.

Their volunteers represent New Orleans’ rich gumbo – poor and wealthy; old and young; black, white, Asian and Hispanic; newcomers and those from New Orleans’ most prominent families. The clipboard-wielding army of Court Watch NOLA monitors are advocates within their communities and with their political representatives.  Whenever the monitors are in the courtroom, government officials pay attention.

“We collect data on these court actors and compare New Orleans criminal court practices to national standards – American Bar Association standards, constitutional standards and standards created by major national victim rights groups,” Levine said. “Court Watch NOLA leads campaigns that shine the light on irregular practices.” New Orleans voters then have the opportunity of ensure that they only vote for those officials whose practices allow the criminal justice system to progress with the rest of the country.

“Public systems do not change without public attention. Transformation is not possible without citizen action. I am proud that Court Watch NOLA has successfully changed the culture of New Orleans. We will continue to shine the spotlight on Orleans Parish local criminal courts so that transformation is possible.”

The Wisdom Foundation is the event’s premier sponsor. Other Court Watch NOLA underwriters include Woodward Design + Build, Canal Barge, and the Helis Foundation.

“Pres Kabacoff has supported progressive criminal justice causes years before such a thing became popular,” said Levine.  “He is often seen in the halls of the legislature representing a clear progressive voice on behalf of the business community.”

Said Eric Holtzman, Court Watch NOLA board chair: “Flozell Daniels’ wide scale work has ranged from sentencing reform to victim rights to bail reform and police transparency.  As a crime victim family member, Daniels has empowered those left behind by a frustratingly opaque criminal justice system. His organization, the Foundation for Louisiana, is one of the few charitable groups listening to the grass roots in Louisiana.”

As the 2020 Orleans Parish judicial elections draw near, Levine hopes to educate voters about their options. “We must hold our elected officials accountable and educate voters in the community about their public servants, their actions and their stated values. Only through ongoing vigilance will our elected officials truly serve the community’s needs.