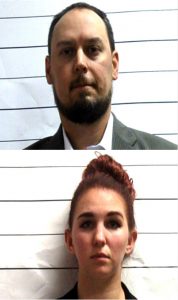 A New Orleans man and woman indicted last month on charges that they raped another woman inside a Leonidas neighborhood home in January 2019 surrendered to authorities in court this week and have been remanded into custody, District Attorney Leon Cannizzaro’s Office announced Friday.

Edward “Eddie” Budd, 39, and Echo Hurlburt, 26, appeared for arraignment before Criminal District Judge Laurie A. White. Each entered a plea of not guilty to a single count of first-degree rape, charges that were handed up Oct. 24 by an Orleans Parish grand jury.

White ordered both defendants remanded into custody at the Orleans Justice Center jail. Hurlburt has been jailed since Wednesday, when she initially appeared in court without an attorney. She has since hired a private lawyer and remains jailed in lieu of a $500,000 bond.

Budd appeared in court Friday, three days after his scheduled arraignment. White lowered his bond from $500,000 to $150,000 but also ordered him remanded into the custody of the Orleans Parish Sheriff’s Office.

Each defendant faces a mandatory lifetime prison sentence if found guilty as charged of first-degree rape. The former dating partners are accused of taking a 25-year-old woman out for drinks on Jan. 17, 2019, then bringing her back to Budd’s house for a three-way sexual encounter without her consent, after the woman said she was incapacitated by an unknown substance.

The victim told New Orleans police she lost memory and control of her faculties after drinking the contents of a shot glass offered by Budd at a nearby bar. Days after the encounter, the victim said Hurlburt told her they both had sex with Budd. The victim reported the incident to New Orleans police on Jan. 29.

Budd and Hurlburt were arrested on May 30 and June 3, respectively, and were free on bond when indicted by the grand jury. Investigators ask that anyone else who might have had similar experiences with Budd or the couple contact authorities in the sex crimes units of either the NOPD or the Orleans Parish District Attorney’s Office.