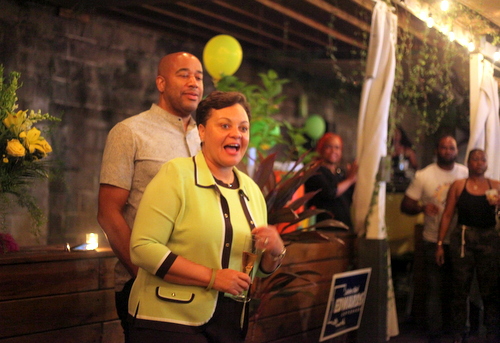 State Sen. Karen Carter Peterson sailed to re-election to her final term representing Uptown in the state legislature on Saturday night, but much of the rest of the New Orleans delegation remains to be determined with tight House races leading to runoffs.

Peterson easily held on to her seat with 79 percent of the vote after facing a challenge from fellow attorney Allen Borne Jr., a fellow Democrat. Two other potential challengers withdrew from the race.

Peterson, the current chair of the Louisiana Democratic Party, has represented the 5th District since 2010. She previously served in the state House of Representatives for District 93.

Mandie Landry and Robert McKnight will face off Nov. 16 in a race to take over the House seat vacated by term-limited Rep. Walt Leger. Attorney and civic activist Landry has spoken out for labor and women’s issues; McKnight, a public defender, has been vocal on criminal justice reform.

They ran in a highly competitive primary with two other Democrats, “Pepper” Bowen Roussel and Carling Dinkler. District 91 covers a large band of neighborhoods from the Irish Channel through Milan and Broadmoor into Hollygrove.

In one of the most competitive and crowded races of the primary, Aimee Freeman came out of the primary with a clearest lead over the six other candidates. It was less clear who her runoff opponent would be until the final ballots were counted, with Kea Sherman and Ravi Sangisetty running neck and neck and Carlos Zervigon not far behind.

Freeman, a business consultant, will be facing Sherman, an attorney, in the Nov. 16 runoff to replace Rep. Neil Abramson, who is term limited. District 98 covers the corner of the Riverbend, and the surrounding Audubon, Carrollton, university and Freret areas.

State Rep. J. Cameron Henry Jr. will take the seat vacated by Sen. Conrad Appel, who is unable to run again due to term limits. He ran against political newcomer and fellow Republican Jon “Frankie” Hyers.

Republican James “Jim” Garvey held on to his seat on the Board of Elementary and Secondary Education in a race against Marion Bonura and Lee Price-Barrios.

Incumbent Kira Orange Jones, a charter school advocate, will continue to represent District 2 on the Board of Board of Elementary and Secondary Education, beating challengers Shawon Bernard and Ashonta Wyatt.