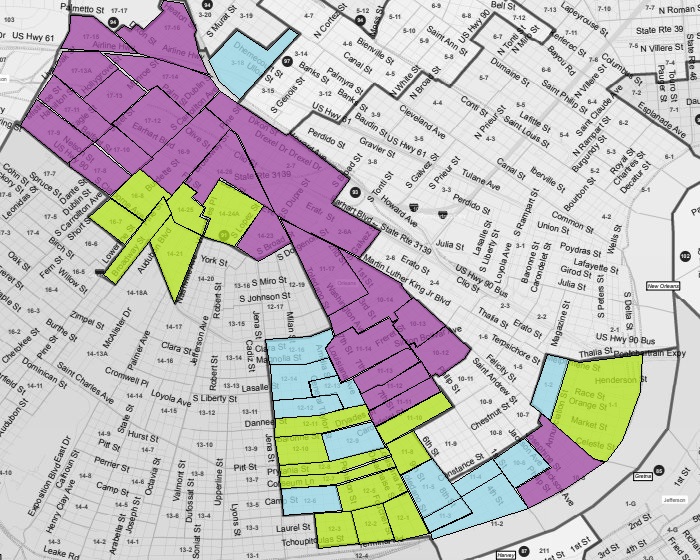 Precincts where Robert McKnight led are in purple; Mandie Landry’s are in blue, and Carling Dinker’s are shaded green. (map by UptownMessenger.com)

Although District 91’s vote total overall was nearly a three-way tie, an analysis of how each precinct voted shows that Robert McKnight secured his first-place finish by winning the most precincts of any candidate. Mandie Landry trailed him by only 18 votes and secured her place in the runoff, meanwhile, by posting strong second-place showings in nearly every precinct where McKnight or third-place finisher Carling Dinkler led.

McKnight — a public defender who has made criminal-justice reform a centerpiece of his campaign — built his lead with strong performances in 23 precincts from Hollygrove through Gert Town, Broadmoor and Central City, 15 of which he won outright with 50 to 60 percent of the vote.

Dinkler actually won a plurality in slightly more precincts than Landry — 17 (four of which he won outright) to her 12. Despite leading in fewer districts, Landry surpassed Dinkler’s vote total by coming in a close second in all but three of the 40 precincts led by either McKnight or Dinkler — avoiding any of the single-digit showings that McKnight and Dinkler posted in some of the districts each other won.

Dinkler’s strongest precincts were around St. Charles Avenue, the riverside precincts upriver from Louisiana Avenue, and Fontainebleau. Landry — an attorney who has championed health-care access, abortion access and labor — drew her support from the Milan neighborhood and the Irish Channel, as well as winning the lone Mid-City precinct in the district. The three candidates each led in different Lower Garden District precincts.

Although Pepper Bowen Roussel did not lead in any precincts, she garnered more than 20 percent of the vote in five precincts, with her strongest showing, at 24.4 percent, in Precinct 1-1 in the Lower Garden District.

Turnout in District 91 was 32 percent, somewhat lower than the 38 percent in the rest of the city.

The runoff between McKnight and Landry will be Nov. 16.