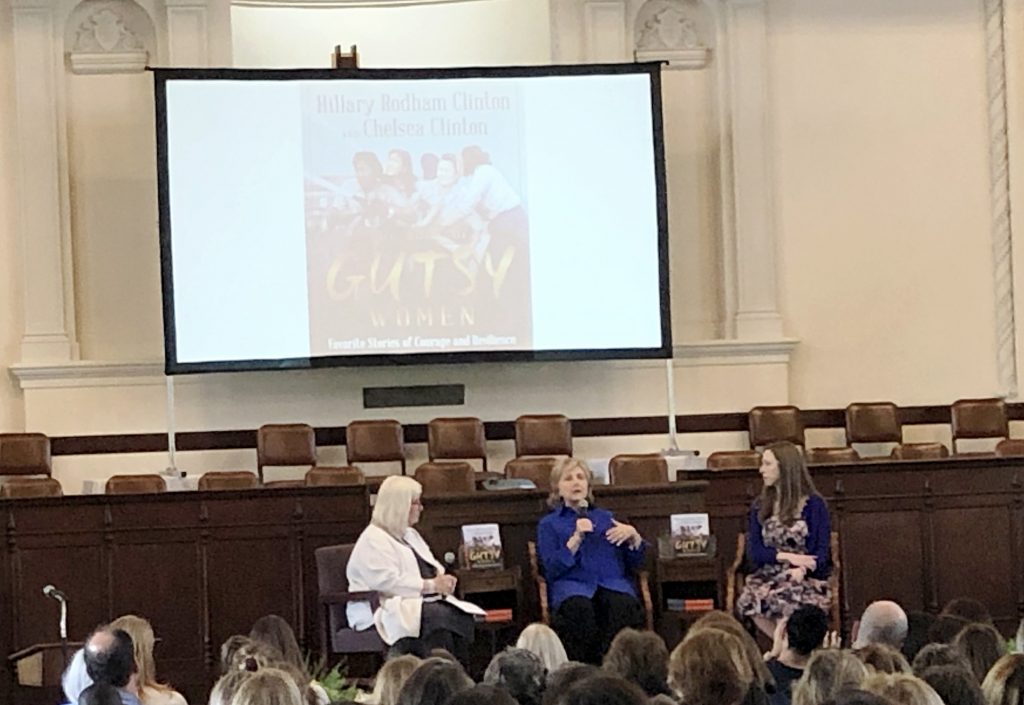 Hillary and Chelsea Clinton appear with moderator Susan Larson, left, at the St. Charles Avenue Baptist Church on Saturday, Oct. 26, to promote their book about inspiring women. The event was hosted by Octavia Books. (Sharon Lurye)

Hillary and Chelsea Clinton talked about the women who inspired them and opened up about experiences with bullying on Saturday during a discussion of their just-published Book of Gutsy Women.

Speaking in front of a packed, almost entirely female audience at the St. Charles Avenue Baptist Church, the former Secretary of State and her daughter championed the women who served as role models because of their courageous fights for social justice. The book, co-written by the mom-and-daughter team, features 103 stories about historic women (and one fictional girl, Nancy Drew.)

“Given the times we’re living in, we all need examples of how to be courageous and brave, and how to stand up for what we believe and stand up to bullies,” said Hillary Clinton at the event hosted by Uptown independent book store Octavia Books. 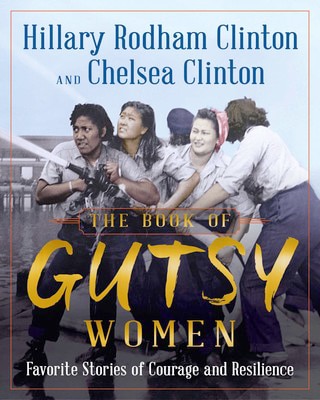 While many of the women featured in the book are famous (Harriet Tubman, Florence Nightingale), the Clintons brimmed with the most enthusiasm when they brought up the women that rarely get taught about in schools.

Hillary talked about courageous doctors: Yaojie Gao, who was exiled from her family and country because of her vigorous activism during the AIDS epidemic in rural China; Hawa Abdi, who stood up to gun-toting militants in Somalia to protect 90,000 people during a draught; and Mona Hanna-Attisha, a pediatrician who is fighting for clean water in Flint, Michigan.

Chelsea spoke about two little-known civil rights pioneers: Elizabeth Peratrovich, a Tlingit woman who fought against school segregation in Alaska, and Claudette Colvin, who got arrested at just 15 years old for refusing to give up her seat on a segregated bus – months before Rosa Parks much more famously did the same.

“I’m trying my small part to write Claudette back into history, because she deserves to be there,” Chelsea Clinton said.

The event’s most personal moment happened when a 9-year-old child in the audience asked the Clintons how they stand up to mean comments. Chelsea said she has gotten used to getting hate all her life because of who her parents were. People told her when she was 8 years old that they wished she had been aborted. When Bill Clinton was in the White House, everyone from Rush Limbaugh to Saturday Night Live made fun of teenage Chelsea’s appearance.

As painful as that experience was, she’s grateful because it’s left her better able to handle the abuse that many famous women have to deal with in the social media age. Today, she said, the most hateful comments come anti-abortion commenters, because of her pro-choice stance, and anti-vaccination activists, because she’s a professor of public health.

“I’m really thankful that that happened at a young age, because I think that has served me well, particularly in this moment we’re living through when there’s lots, sadly, of ugliness,” Chelsea Clinton said.

Hillary Clinton praised her daughter for always responding with politeness and “cheerful shade.” She said there will always be hate in society; what’s important is that “leaders in a democracy like ours are supposed to be trying to bring people together. They’re certainly not supposed to be fomenting bullying and hatred.”

She quoted what her husband Bill Clinton said in his recent eulogy for U.S. Rep. Elijah Cummings: “Freedom cannot last if half of us are supposed to hate the other half about everything.”

Secretary Clinton never explicitly mentioned Donald Trump, the man she lost the 2016 election to, but he lingered as the elephant in the room.

At one point the moderator, Susan Larson, asked her to talk about “the role of anger as a motivating force for women.” Clinton gave a sighing, drawn-out, “OK …” and the entire room burst into laughter and applause.

“I think what’s important here is that the anger that you’re talking about is anger at injustice,” Clinton continued. “It’s anger at inequality… It’s that kind of anger that can motivate the movement into courage and into taking action.”

After the event, members of the public lined down the length of the entire chapel to grab up copies of the book. Renée Rolland, who was wearing a bright dress printed with the face of gutsy artist Frieda Kahlo, said it was a refreshing event.

“It felt good to be in the room with the Clintons again,” she said. “I did need that, I really did.”

Another woman at the event, Courtney Bounds, said she appreciated “the candor of the comments” and the discussion of “some women that I have honestly never heard of.”

“Chelsea was so eloquent in saying she had managed a lifetime of criticism for no reason other than she was the child of political leaders,” said Bounds. “(She) took the hit again and again. That made her stronger, and allowed her to endure, allowed her to resist and persist.”

The event was aimed most of all at mothers and their daughters. Sarah Bell said she was happy she came with her 12-year-old, Ruby.

“For her to be able to come and see these awesome women talking and really praising other women in history and contemporary life was inspiring and insightful,” said Bell. Ruby, for her part, said she most enjoyed learning about the 103 gutsy women in the book.

“It taught me a lot of stuff that I didn’t usually learn in history class,” she said.