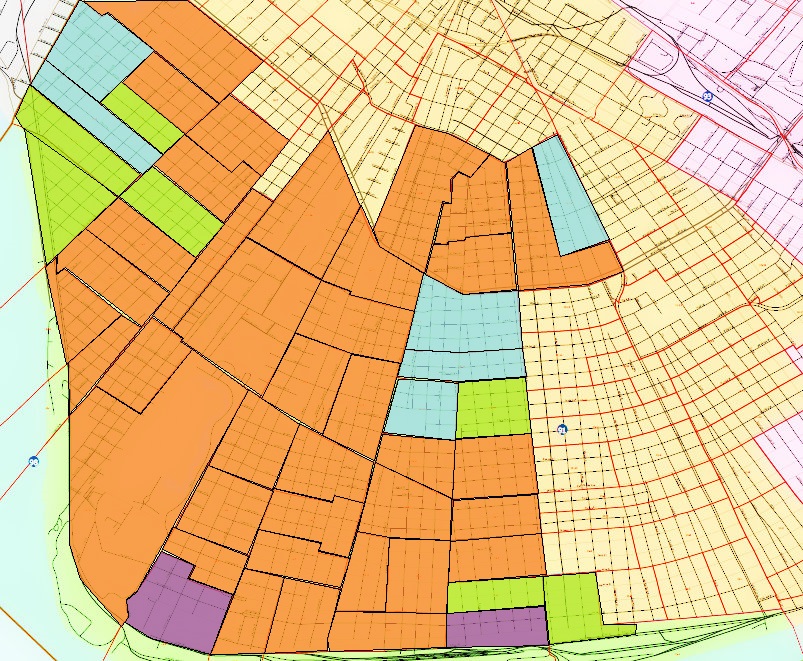 Orange precincts are those led by Aimee Adatto Freeman. Blue were led by Kea Sherman, green were led by Carlos Zervigon, and the purple precincts were led by Ravi Sangisetty. (map by UptownMessenger.com)

While the crowded District 98 race was as competitive as expected — with none of the seven candidates garnering even a third of the overall vote — Aimee Adatto Freeman led with large margins in nearly all the 14th Ward precincts around Audubon and the universities to finish first overall.

Her three closest competitors — Kea Sherman, Ravi Sangisetty and Carlos Zervigon — all won a few precincts around the borders of District 98 as they battled for second place, according to an analysis of election results from the Secretary of State’s office. Sherman ultimately edged out Sangisetty and Zervigon to face Freeman in the Nov. 16 primary.

Freeman won every precinct except one in the conservative-leaning 14th Ward (between Jefferson Avenue and Broadway Street). She was the only candidate to win any precincts outright with more than 50 percent of the vote, and five of the six of those were on the downriver side of Audubon Park in the 14th Ward.

Sherman found two bases of support, in the Freret area (where her family’s bar Cure and her own law office are located on Freret Street) and in west Carrollton. She also led in a precinct in Broadmoor.

Sangisetty led in two precincts, both adjacent to the Mississippi River downriver from Audubon Park.

Sherman and Sangisetty had a similar number of second-place showings behind Freeman, partially explaining why the difference in their total at the end of the night was fewer than 50 votes.

Zervigon led in about a half-dozen precincts near Sherman’s, both in the Riverbend and along Napoleon Avenue’s riverside. He also came in second in a number of precincts, making his fourth-place finish only 200 votes behind Sangisetty in third.

Bergeron’s best showing were two precincts where he won nearly 15 percent each, both near Oak Street in Carrollton. Freistadt’s strongest precincts were two where she won more than 11 percent of the vote, both near Tulane University. Chiz had his best results in Carrollton near Claiborne Avenue.

Voter turnout in District 98 was 37.5 percent, close to the 38 percent citywide.

The “bellwether” precinct with the results most resembling that of District 98 as a whole was Precinct 13-15 in Broadmoor (along Claiborne between Jefferson and Napoleon). There, Freeman led with 31 percent of the vote, Sherman came in second with 18 percent, followed closely by Zervigon and Sangisetty.