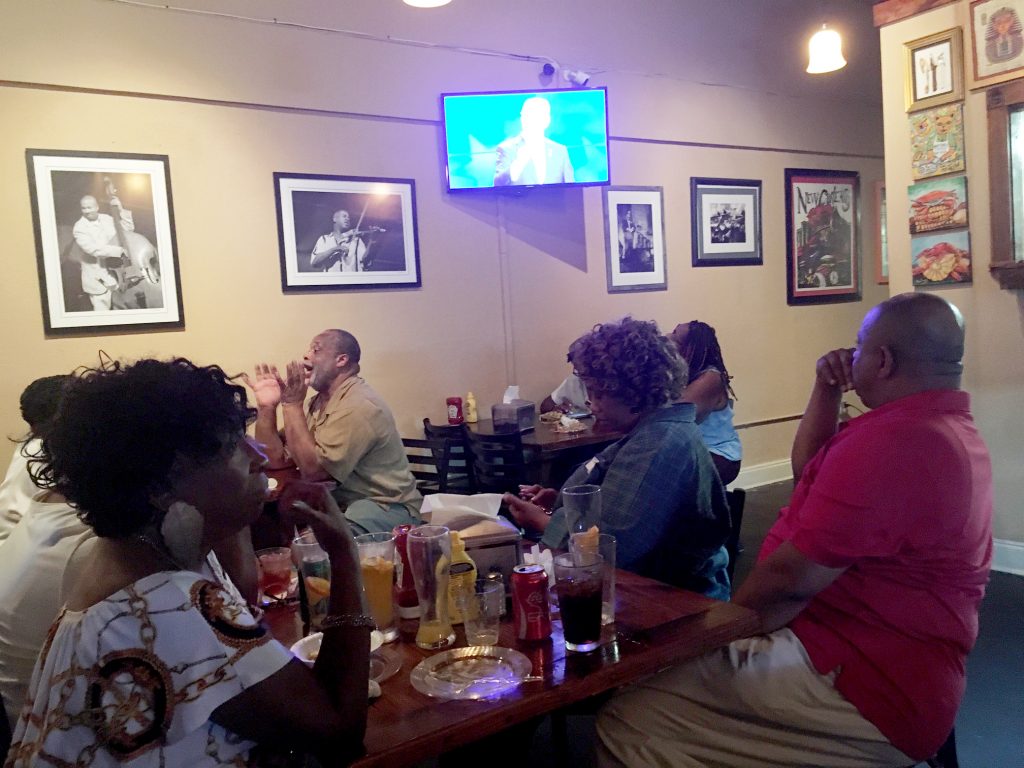 Patrons at Bayou Road’s Half Shell on the Bayou watch the gubernatorial debate on Wednesday, Oct. 8. (Danae Columbus)

Despite heavy attacks from his Republican opponents and their related political action committees, Gov. John Bel Edwards was sailing toward a primary victory. Armed with an abundant war chest and a bipartisan coalition that was holding together, Edwards’ team could smell victory until two negative spots about former senior staffer Johnny Anderson hit the airwaves. Sources say Anderson had a history of sometimes being “a bad boy.” Until the #MeToo movement began, his habits were tolerated.

Though the Edwards campaign quickly countered the attacks, the Anderson spots are an unnecessary distraction that slowed Edwards’ momentum. Anderson was even the subject of the first question asked Edwards in last night’s televised debate. Add on the relentless “Vote Republican” mantra by heavy-hitters including Louisiana’s congressional delegation, Vice President Mike Pence, Donald Trump Jr. and even President Trump, who will visit Lake Charles on Friday. The Pence-Trump double-team threat will bring out more Republicans and prevent some of Edwards’ past supporters from crossing over.

During early voting East Baton Rouge citizens outperformed every other parish. That could be good or bad for Edwards because of the large number of Republican elected officials and voters in Baton Rouge these days. Many of those folks could have cast their vote for Eddie Rispone, the hometown boy who has run a sophisticated but unorthodox campaign void of much of the glad handing, backslapping style voters expect.

Without having served in office, Rispone has less of a record for opponents to tear apart. Abraham has been repeatedly beat up on television and has not adequately responded to every attack. Don’t count out an Edwards victory on Saturday. Yet a Rispone-Edwards runoff would be a battle for the ages.

The only other statewide race of interest is the Insurance Commissioner contest between incumbent Jim Donelon and insurance executive Tim Temple. An elected official for 50 years, Donelon is not doing too good a job of fending off an attack by the much younger Temple, who has invested $1 million of his own money in this down-ballot race.  Although Donelon is scandal-free, Temple keeps pounding him about the high cost of insurance in Louisiana. Perhaps Donelon wishes he had retired before this race began.

Today the voting machines are all being checked to ensure their working condition. Tomorrow they will be delivered to 122 polling locations across the city. The polls open at 7 a.m. Saturday and close at 8 p.m.

In between going to festivals and watching football, please make every effort to get out and vote. As one candidate said this morning, “it’s been a hard-fought race. I’m ready to see what the voters have to say on Saturday.” Democracy in action is always a good thing.

“Everyone has BRCA genes. But when those genes are mutated, BRCA proteins are unable to fully repair any damaged DNA. This leads to mutations in other genes that collectively increase the risks for cell growth that forms cancerous tumors,” said breast cancer survivor Corinne Decre-Villavasso who founded Hannah’s Klozet.  Beyonce’s father, Matthew Knowles, developed breast cancer after having been diagnosed with the BRCA mutation.  Fourteen percent of men with breast cancer have a BRCA mutation.

Event organizers are looking for 250 participants who will walk, Zumba or Line4 Dance with the Real New Cupid (the cupid shuffle) as part of the region’s entry in 1 Million Steps for Cancer Prevention. Volunteers are also needed to make the event a success. For more details and registration information visit www.brcathon.org.

New Orleanians who wish Hillary Clinton was running for president in 2020 will have a chance to tell her so when she and daughter Chelsea make a brief stop here Saturday, Oct. 26, to sign their new tome, “The Book of Gutsy Women.” Sponsored by Tom Lowenburg of Octavia Books, the event will be held at the St. Charles Avenue Baptist Church, 7100 St. Charles Ave., from 11:30 a.m. until 12:30 p.m. Tickets are available through Eventbrite.

James Carville and Mary Matalin will open their Palmer Street home on Sunday, Nov. 3, for the annual reunion and fundraiser for Loyola University’s Institute of Politics. Tickets are $75 and can be honored by calling IOP Director Tommy Screen at 504-864-7082. For more than 40 years, the Institute of Politics has been a premier leadership training ground for individuals interested in a complete education on politics. IOP Fellows attend a series of lectures, discussions and projects that cover a broad spectrum of political issues and also meet with elected officials, media experts, and social scientists who share tidbits based on their practical experience. Dr. Bob Thomas chairs IOP’s Board of Directors. Other board members include Cheryl Teamer, Suzie Terrell, Tania Tetlow, Katherine Gelderman, John Baker and David Marcello.