In the third part of our ten-essay series by parents of students at public schools Uptown, Celeste Sparks writes about her children’s experience at Andrew H. Wilson Charter School. Uptown, like New Orleans as a whole, has many public school options for families—from college preparatory schools to three different language immersion programs, from a Montessori program to a technology career pathway school. In this series, we hear from parents themselves on why their child’s school is right for them.

Part of the Family: Why My Children and I Love Andrew H. Wilson Charter School 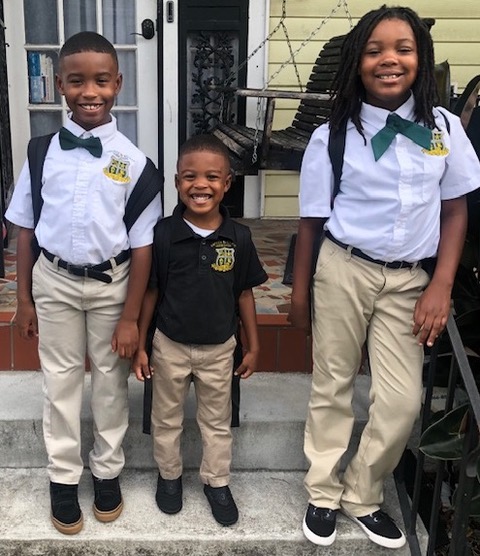 I have three children and I love them so much. Trinity, the oldest, is in fourth grade. She’s intelligent, aware, and doesn’t miss a beat. She’s so curious about what’s going on in the world and wants to know more. Travis is in third grade; he is also very smart. He is in the gifted program and is always so excited and eager to learn. He always has a book in his hand and is the first one ready for school each morning. Treydon, my youngest, is in Pre-K. He loves school, too. He’s already learned his letters, sounds and numbers. Now he is ready to learn to read!

Trinity, Travis, and Treydon all attend Andrew H. Wilson Charter School in Broadmoor. I am so grateful for Wilson because it quenches my children’s thirst for knowledge, and then pushes them to know even more. If your kid is moving a step ahead, the Wilson staff meets them there, and encourages them to step further.

We moved here from Florida during the summer a few years ago, and went through Late Enrollment with EnrollNOLA.* Wilson was one of the schools that had open spots, and we chose it because we had heard it was a good school and it is close to our home. 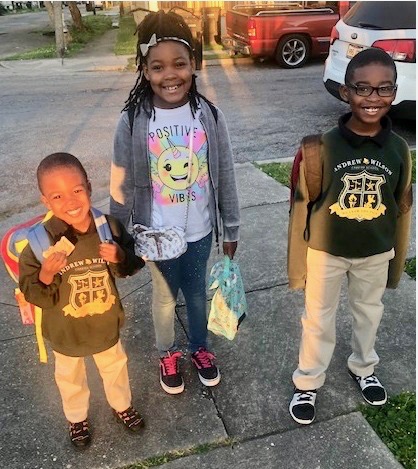 We were not disappointed. When I went to get the paperwork before the first day of school, my first interaction was with Ms. Ashford, who works at the front desk. Immediately, she made me feel a part of the Wilson family. It was her first year, too, but she was so warm and welcoming. Her energy made me feel comfortable and I knew it was the right place for my kids. The first day of school made this even clearer. When we met the teachers, they were incredibly welcoming, too.

As the school year began, my children’s teachers all stayed in great touch. I always felt like I knew what was going on; they were only a phone call or text message away. They showed my children respect and took them seriously as learners and as individuals. Unsurprisingly, then, my children have grown both academically and personally.

Now going into our third year at Wilson, Travis and Trinity are both consistently on honor roll. Teachers continue to reach out with updates on my children’s progress through the Class Dojo app. I received a text message just the other day from Travis’s math teacher: “Travis taught one of his peers the distributive property today!” And then a few days after that: “Travis had a great day in math class!”

The academics at Wilson are rigorous, but with the support of Wilson’s teachers, my children are thriving. Travis’ science and math teachers have expanded his love of learning so much that he applied for a scholarship to attend a local STEM summer camp. He was selected not only to attend the camp but also to receive the full scholarship. He thoroughly enjoyed each day of camp this past summer. 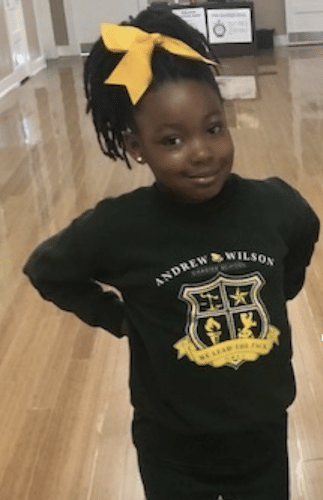 Wilson isn’t just a great place for academics and social-emotional growth. It also gives children a chance to explore the arts and culture of New Orleans. Trinity is on the mini cheerleading team, and they marched in the Femme Fatale parade last year. They all had pom-poms and uniforms for the parade. I was a chaperone; it was exhausting to march that whole route, but it was worth it, because the girls enjoyed it so much. I like that Trinity is at a school where she can engage in athletics, music, and culture, all through one activity.

I feel like the whole team at Wilson has my back, for moments big and small, for the challenges and victories. I know I can trust Wilson’s staff—be it a cafeteria worker, a counselor, a paraprofessional, a teacher, or the principal—with my children. That’s huge for me. When my kids aren’t with me, I just want them to be in an environment where I know they’re being taken care of. Wilson is doing that, and it’s also truly educating them. I’m grateful that my family has the family they’ve become. 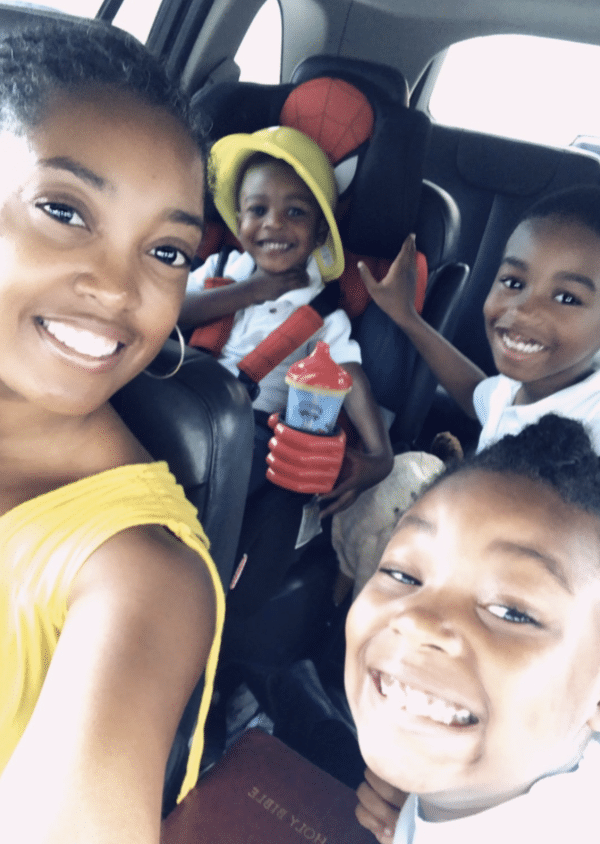 In New Orleans, families with children who will be entering public elementary school or high school—or families who wish to change schools—generally apply for and receive their placement through OneApp. Since the OneApp process takes place during the winter and spring of the school year prior to the year of enrollment, there is a separate process for families who were not present for or missed the OneApp deadlines, or who desire a change in school placement. This Late Enrollment process occurs from July to October, and unlike OneApp, placements are on a first-come, first-served basis.

Andrew H. Wilson Charter School, part of the InspireNOLA Charter Schools network, educates students in grades pre-K thru 8 at 3617 General Pershing Street. Enrollment for the 2020-2021 school year for Wilson and nearly all New Orleans public schools opens this fall through EnrollNOLA. You can find out more information at enrollnola.org or call or visit a Family Resource Center.