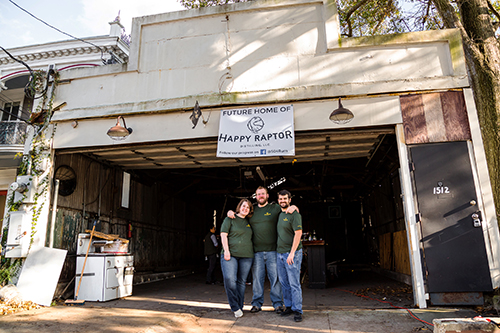 Once the site of a graffiti-covered storage facility, the distillery’s location at 1512 Robert C. Blakes Sr. Drive (a two-block stretch of Carondelet Street) is nestled in a high-traffic but often overlooked area. The micro-distillery will feature a 2,000-square-foot production space and tasting room with an adjacent back patio.

The revitalized space will feature  a custom-built copper still and a mural by local artist Hill Landry. The Happy Raptor team plans to begin production later this month and will open for private events shortly thereafter. They expect to celebrate a ribbon-cutting and open the tasting room for limited hours in January. 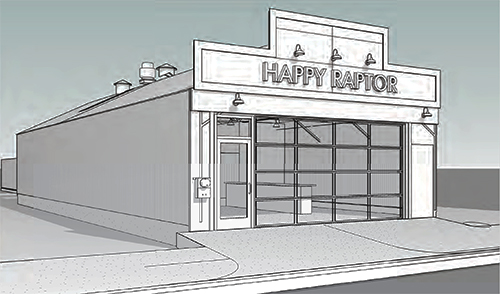 Started by a husband and wife and their former next-door neighbor (a professional mental health counselor, a public relations specialist and a mechanical engineer working with NASA), Happy Raptor Distilling, the city’s news craft distillery, specializes in infused rums made in the Caribbean tradition.

The emphasis is on local as well as Caribbean flavors. “Especially in New Orleans, if we’re going to drink, let’s drink local,” said co-founder Meagen Moreland-Taliancich.

Their inaugural products, 504Hibiscus and 504BananasFoster, are described in a press release as “a light-hearted, unique twist on spiced rum.” Each is hand-crafted with spices, botanicals and citrus, infused over time in a white rum. Ingredients include hibiscus petals, as well as bananas and limes dehydrated by hand.

For Louisiana Craft Spirits Week, during the first week in September, Happy Raptor craft distillery launched a crowdfunding campaign. As of Monday, $20,945, well past the original $15,000 goal, had been raised. Happy Raptor is now aiming for $30,000 in crowdfunding to help pay for back-bar equipment, tasting-room decor and beautification projects.

“We are excited to give the community an opportunity to get involved before our doors even open. Supporters of the campaign will have access to special perks that can only be found there, and some never again since we’re gearing up for a grand opening,” said co-founder and head distiller Mark Taliancich in a news release. “There has been a good deal of excitement around this project and we are so grateful for the support.”

For more on Happy Raptor Distilling online, visit www.happyraptor.com. Updates can be found by following @504Rum on Facebook and Instagram.