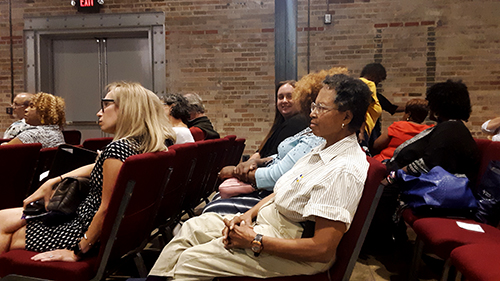 Mayor Latoya Cantrell told a meeting on affordable housing Wednesday that she wants to push New Orleans to 65 percent homeownership, well above the current percentage of around 46 percent.

Residents in the area surrounding the Ashe Powerhouse Theater are predominantly renters, and Cantrell said she wants more homeownership to allow residents to build equity and pass that value to their children. 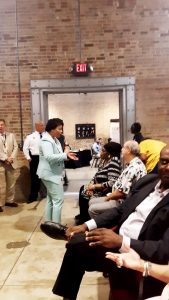 Mayor LaToya Cantrell talks to residents during her District B stop on the affordable housing tour. (Jesse Baum)

This is especially important in New Orleans, Cantrell said, where burgeoning rent prices have pushed long-time residents out of their neighborhoods, and black renters are disproportionately likely to be cost-burdened — paying over 30 percent of their household income to housing costs.

Much of Wednesday’s meeting focused on the upcoming statewide ballot measure on a Louisiana constitutional amendment that would allow the city to exempt certain properties from the ad-valorem (property) tax for the purpose of affordable housing, provided that they meet certain requirements. This would create affordable housing initiatives that could fill gaps left by cuts from federal funding.

The amendment, which will appear on the Oct. 12 ballot across Louisiana, will read as follows: Do you support an amendment to allow the City of New Orleans to exempt property within Orleans Parish from all or part of ad valorem taxes that would otherwise be due for the purpose of promoting affordable housing?

Though the amendment, if it passes, will only create the opportunity for Orleans Parish to use this property tax exemption for affordable housing programs (rather than creating the policies themselves), there will be certain restrictions built into the amendment, should it pass.

The tax exemption could not be used for buildings with short-term rentals. The city would also not be able to raise property taxes to make up for any lost revenue.  It also would not be available for apartment buildings with more than 15 units, a measure meant to favor small-time landlords and keep the incentive from being used on large condo buildings.

“Most people in our city, they don’t like that model so well,” said Cantrell of larger multi-family buildings.

Though no policies have been written yet, Cantrell and representatives from the Office of Community Development mentioned a few different ways that the property tax exemptions could work in New Orleans to create affordable housing opportunities, comparing it to the tax break for  older homeowners.

Another part of the mayor’s strategy for affordable housing comes from recognizing that some households may make enough money that they do not qualify for federal assistance through the Department of Housing and Urban Development’s programs, such as Section 8 vouchers, but are still struggling to afford New Orleans’ housing market. 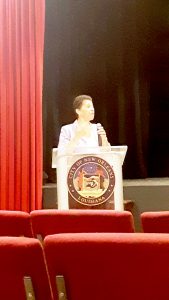 Some programs may include assistance for renters to become first-time homeowners, renters who were previously homeowners and are looking to become homeowners again, and developers looking to build affordable housing. Property tax abatements could also mean incentives to bring vacant properties back into commerce.

Ellen Lee, director of the New Orleans Office of Community and Economic Development, mentioned that if the amendment passes, the administration will look for community participation to see what types of programs are most needed.

“This [amendment] will just allow us to create the programs.” Lee said. “We will need to work with the administration, council and community to create the housing programs.”

You can find the information for the remaining Affordable Housing Tour here. The election for Louisiana voters to cast their ballot on Constitutional Amendment 4 is Saturday, Oct. 12. You can view a sample ballot and find your polling place here