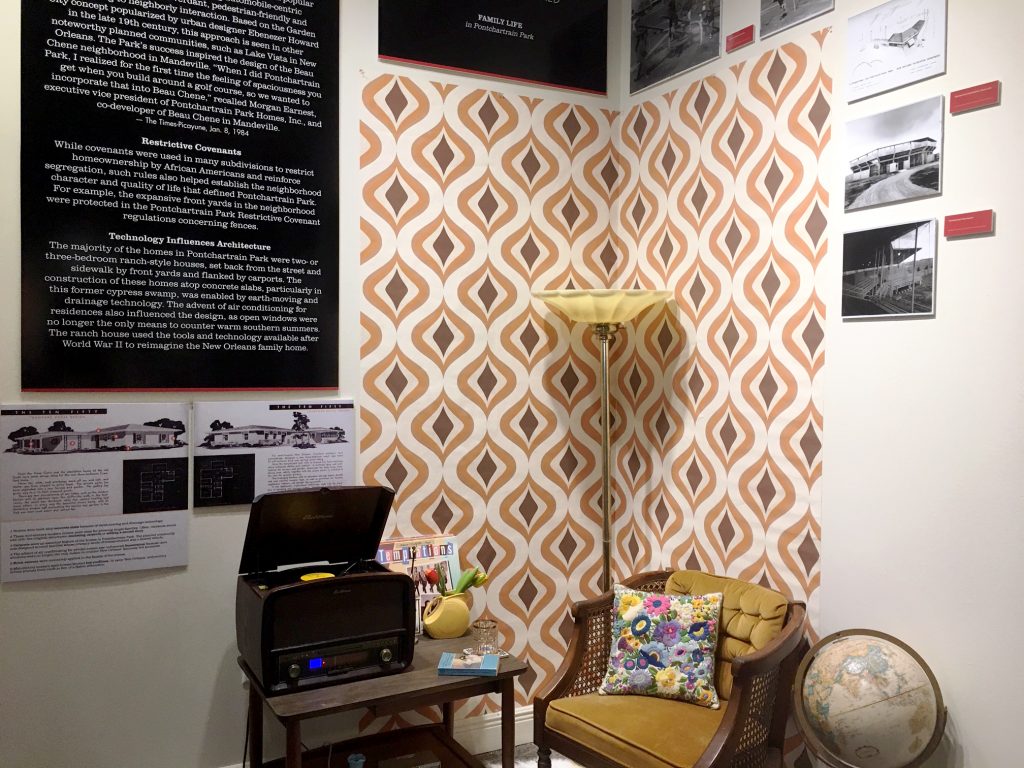 The PRC exhibit at 923 Tchoupitoulas St. shows the lifestyle Pontchartrain Park residents enjoyed in the 1950s and ’60s. (Danae Columbus)

The Preservation Resource Center opens a new exhibit tonight on the history of Pontchartrain Park, the city’s first suburban-style subdivision for middle-class and affluent African-American residents.

Featuring historic neighborhood ads and newspaper clippings, information about architectural style and neighborhood design, as well as incredible personal family photos and stories from some of Pontchartrain Park’s founding residents, the exhibit is being mounted as a celebration of a joint submission to the National Register of Historic Places. The PRC and the Pontchartrain Park Neighborhood Association collaborated on the application for designation. 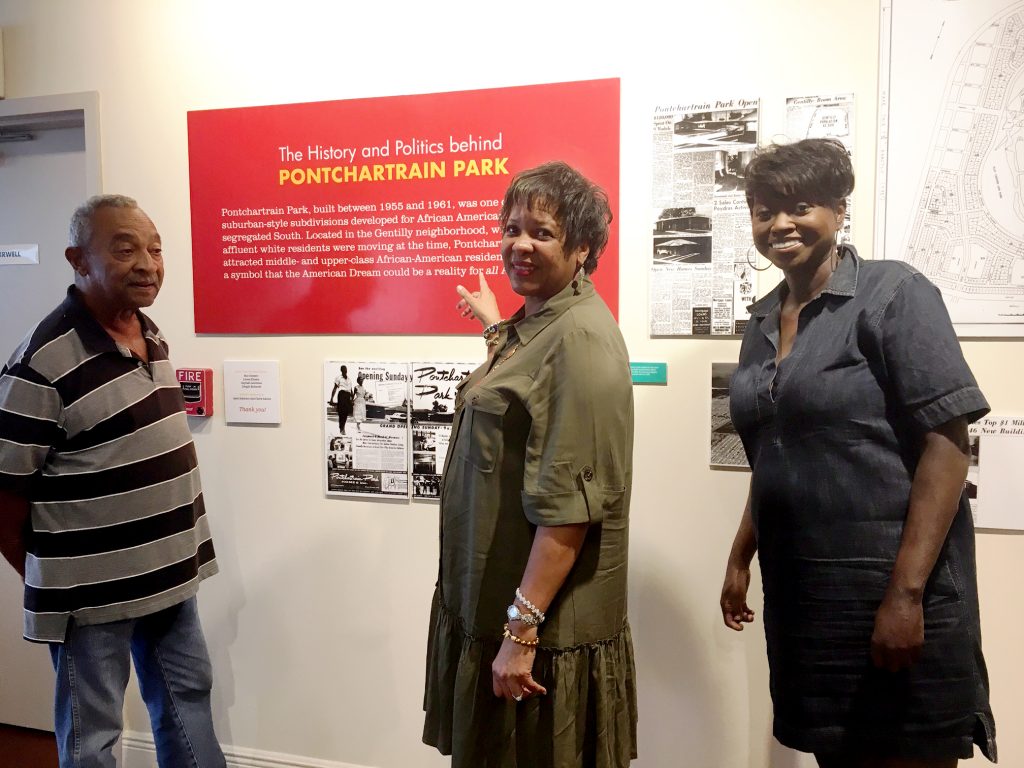 “Pontchartrain Park was our Mayberry,” said neighborhood association president Gretchen Bradford, referring to a 1960s American television program that epitomized life in a small town. “I have lived in the Park my entire life; it’s the only neighborhood I’ve ever known.”

The concept for an African-American subdivision came from local civil rights activist Rosa Keller. Along with her husband Chuck, Keller approached philanthropist Edgar Stern for startup financing. Stern then brought in the highly capable developer Lester Kabacoff to handle the details.

Pontchartrain Park was built in 1955 on land reclaimed from a cypress swamp. Yet its proposed existence – during the segregated Jim Crow era and almost a decade before President Lyndon Johnson signed the Civil Rights Act into law – was revolutionary.

Built by Crawford Homes — the company that previously developed the adjoining all-white Gentilly Woods subdivision — the neighborhood was constructed on a one-square-mile plot of land that surrounded what became a city-owned recreational park by the same name.  Soon after, the Joseph Bartholomew Sr. Municipal Golf Course opened. It was followed by Mary A. Coghill Elementary School, Southern University in New Orleans, churches of various denominations, and Wesley Barrow Stadium — which today is also the home of Major League Baseball’s Urban Youth Academy.

David M. Greenup, a postal worker who loved to “sell stuff” and had had an altercation with his postal supervisor, signed on as the first sales manager. Two generations later, Greenup’s descendants, including son Rodney D. Greenup and granddaughter Raquel G. Richmond, are still selling real estate in the Park.

“My parents moved to the Park when I was 7 years old. We never had a problem,” said Greenup. “It was a wonderful place to live and was designed for the growing African-American upper class – doctors, lawyers, teachers, principals and first-responders. We played basketball at Coghill School. If the gates were locked, we hopped the fence. Friday night was movie night at Bethany United Methodist Church.  We had our own neighborhood curfew – when the street lights went on, we had to be home.”

Senior citizen Ruth Oubre no longer lives in the Park but her son Hurby is raising his children in their family’s original home.  “It was a very nice environment. The neighborhood was one big family and everyone got along,” Oubre said. “The children – now all adults of course — were known as the ‘Park Brothers’ and they still get together once a year. They check on each other. We all raised fine young men.”

Because of its geographic location, Pontchartrain Park was especially devastated during Hurricane Katrina but has been coming back. Dozens of new raised homes were built after the storm along with a convenient WalMart. The New Orleans Redevelopment Authority owns almost 70 additional lots that are ripe for construction.  Many residents believe that being listed on the National Register of Historic Places will add prestige to the neighborhood and spur future growth.

“I grew up in Pontchartrain Park, and it has always been a great neighborhood,” said Shari Baker who moved away in her mid-30s but returned with her two children after Hurricane Katrina to help her aging parents. “I wanted to come back. Many of the people I grew up with are now living in their parents’ homes. It’s like still growing up with the same people.”

Pres Kabacoff recalls that U.S. House Speaker Sam Rayburn visited his father, Lester Kabacoff, while Pontchartrain Park was under construction. After touring the site, Rayburn noted that the construction project “didn’t make any sense at all.” Surely, it was ahead of its time.

After tonight’s opening, the exhibit will be available for viewing at the PRC’s offices, 923 Tchoupitoulas St., Monday-Friday from 9 a.m. until 5 p.m.   For more information on the PRC’s Multicultural Heritage Preservation efforts, call Sarina Mohan at 504-581-7032.

Democratic front-runners Joe Biden and Elizabeth Warren face off tonight in Houston in what should be a no-holds-barred wrangle where key issues are promoted and personal shortcomings exploited. Biden will try to avoid making more gaffes, which could diminish his front-runner status. Warren will continue to distinguish herself as a progressive alternative with well-thought-out ideas. Bernie Sanders will pound on many of the same issues that made him a household name four years ago. Kamala Harris will push her new criminal justice plan in an effort to reverse declining poll numbers.  On the other side of the country, President Trump will address House Republicans at a Baltimore retreat. Several watching parties are scheduled tonight, including at Café Istanbul.

With just more than 30 days remaining until the Oct. 19 elections, it’s a good time to follow the money. The most important detail in the latest reports — which are due tonight at midnight — won’t be how much a candidate has raised but how many dollars remain in the kitty to push out the vote on Election Day.  House District 94 candidate Kirk Williamson is blowing his own horn with more than $100,000 raised and $30,000-plus available for spending. Williamson has been endorsed by the Orleans Parish Republican Party Executive Committee and the state Republican Party.