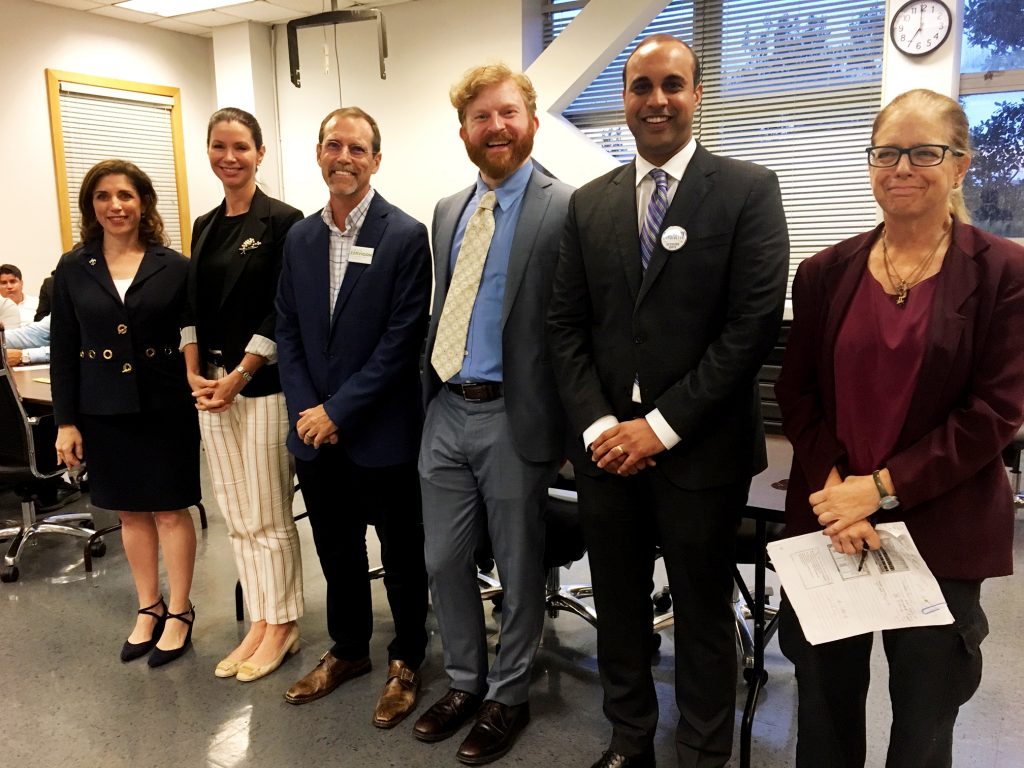 The race to fill the important House District 98 legislative seat being vacated by the term-limited Rep. Neil Abramson is perhaps the most exciting contest in this election cycle because of an outstanding field of highly qualified candidates.

Retired microbiologist and climate activist Marion “Penny” Freistadt  (rhymes with “Who Dat,” she noted) believes that Louisiana is at a historic moment. “If we don’t solve the climate crisis, there will be no other issues to worry about,” she said.

The daughter of a Holocaust survivor, Freistadt said many of the industries along the Mississippi River are engaged in systemic racism and that a moratorium should be placed on new petro-chemical plants in Louisiana. As a scientist, Freistadt prefers data-driven approaches and touts her experience running research laboratories.

Civil rights attorney and prolific fundraiser Ravi Sangisetty, a first-generation American of Indian descent, said he loves being a Democrat.  “My father arrived in Louisiana with $7 in his pocket. Doors were not open for him.”

But he had a desire to live the American dream. A native of Houma who attended Princeton University, Sangisetty said that now retired federal Judge Stanford Duval inspired him to get involved.

“I am proud of what I do every day. My wife, a pediatrician, and I live our values of economic and social justice,” he said. “I am ready to right for my children and your children. We should be ready to celebrate our diversity.”

Mississippi-born and -raised Max Hayden Chiz is the race’s new face. America’s top professional fencer, Chiz is an electrical engineer, an attorney and a businessman with an MBA.

“New Orleans is drafting a new team to go to Baton Rouge, and I a team player,” he said. Chiz said that Louisiana has many complicated problems with the state’s budget and that he will bring “something new” to the table. Chiz also supports the legalization of marijuana as a recreational drug.

A former teacher, charter school leader, sculptor, visual artist and philanthropist, Carlos Zervigon recalled the multi-generational commitment his family has made toward civil rights and education.

“I am from a long line of fighting Democrats including my grandmother Rosa Keller and my mother Mary Zervigon,” he said. “In my family we serve by example and solve problems when they come up. We are at a pivotal moment. Everyone hates the current tax system. We need a more equitable system.”

The daughter of two “hippie” musicians, education and women’s rights advocate Kea Sherman worked her way through college and came back to New Orleans after Hurricane Katrina to help rebuild. A lawyer who specializes in civil litigation and small business, Sherman co-founded the women’s campaign training program Emerge Louisiana and Les Femmes PAC, which has supported 17 women candidates.

As a young mother, she believes that children who miss out on early childhood education “start from behind and stay behind.”  Sherman also feels that people who work 40 hours per week “should not be living in poverty.”

Freeman said  she was a Republican at one time, but that the Republican Party “left her.”

“I am pleased to be a Democrat,” she said. “I stand for Democratic values including choice and equal pay. I care about women.” Freeman cited her mother, Be-Be Adatto, as a major influence in her life because of her dedication to racial equality.

When asked about support for Mayor LaToya Cantrell’s “fair share” mantra, all the candidates agreed that the city of New Orleans deserves additional funding from tax dollars currently funneled through the state.

“We have to work together across party lines to bring money back to New Orleans,” said Freeman.

Sherman applauded Cantrell’s efforts and pledged to work like Rep. Neil Abramson did to build support statewide. Zervigon said he would find common ground with other legislators and move as a single group in a coordinated way when Cantrell was ready.  Chiz said he believes his early life experiences in rural Mississippi prepared him to work with rural Louisiana legislators. Sangisetty said that the role New Orleans legislators play in the race for the next speaker of the Louisiana House of Representatives is crucial to the city’s legislative success.

Though all four speaker candidates are Republicans, Sangisetty said as a progressive who is not overly partisan, he can forge a new partnership. “New Orleans lawmakers must work behind the scenes to have the broadest impact.”

Freistadt views every issue through a climate crisis lens. “Louisiana is a resource-rich state with lots of money going out of the country. We need to negotiate for more of the profits,” she said.

Committee assignments are also important to New Orleans’ legislative success. Sangisetty would prefer to serve on Ways and Means, Civil Law, and House and Governmental Affairs to have stronger input on the infrastructure bill, social justice and redistricting. He wisely suggested that the best appointments are to conference committees where legislation is hashed out. “That’s the room you really want to be in,” he said.

Freeman is interested in Appropriations and Ways and Means, where her understanding of finance and budgeting could be useful. “I want to be a player on the budget,”  she said. She would like to funnel money from the state’s surplus into early childhood education.

Sherman prioritized House and Governmental affairs to help redraw district boundaries and education. “I am a passionate advocate of education and job opportunities for the next generation.”

Zervigon’s first choice is also the Education Committee. “I could start to lead from Day 1. I want to fight for universal pre-K, a more equitable economy and shared prosperity.” Regarding redistricting, Zervigon believes that “New Orleans will have no power if representation is not protected.”

Attorney and candidate Evan Bergeron was not present for the forum.  At the beginning of the event, OPDEC officials announced they had extended Bergeron an invitation by email and phone but Bergeron said he never received it.

“We have been honored to attend every candidate forum, debate and community event that we have been invited to,” wrote Bergeron in an email. “We did not receive an invitation to OPDEC and found out about the event during the event while we were out knocking doors.” Bergeron said he has the second-most cash on hand and that the race for HD 98 is still wide open.

Danae Columbus, who has had a 30-year career in politics and public relations, offers her opinions on Thursdays. During the election season, she will be contributing additional columns. Her career includes stints at City Hall, the Dock Board and the Orleans Parish School Board and former clients such as District Attorney Leon Cannizzaro, City Councilman Jared Brossett, City Councilwoman-at-large Helena Moreno, Foster Campbell, former Lt. Gov. Jay Dardenne, former Sheriff Charles Foti and former City Councilwomen Stacy Head and Cynthia Hedge-Morrell.