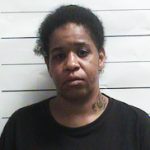 The New Orleans Police Department arrested a woman in a domestic battery and theft incident reported Sunday in Central City.

Dominique Flot, 34, faces charges of theft, criminal damage to property, battery upon a dating partner and child endangerment, according to the Orleans Parish Sheriff’s Office.

Police accuse her of breaking a window and invading a home in the 2600 block of Jackson Avenue on Sunday, Aug. 25, at about 4:10 p.m., then cutting a 29-year-old man on the hand and wrist with a kitchen knife. According to the police report, she also stole the man’s cellphone before fleeing. Flot was later apprehended and jailed at the Orleans Justice Center.