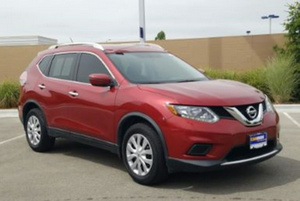 A photo of a Nissan Rogue SUV similar in color and model to the one believed to have been used in a fatal shooting on Josephine Street earlier this month. (image via NOPD)

A Nissan SUV believed to have been used in a fatal shooting earlier this month on Josephine Street was previously seen in an armed robbery in a lakefront neighborhood, New Orleans police said.

Shortly after 10 p.m. Tuesday, Aug. 6, a man got out of a red-orange Nissan Rogue SUV in the 2800 block of Josephine Street and began shooting, according to a NOPD news release.

The victim — later identified as 23-year-old Gary Jordan — was hit multiple times and later pronounced dead with the gunshot wounds identified as the preliminary cause, according to the Orleans Parish Coroner’s Office.

Anyone who has seen the vehicle or has other information about the shooting is urged to call NOPD Homicde Detective Aaron Harrelson at 658-5300, NOPD Third District detectives at 658-6030, or Crimestoppers at 822-1111.