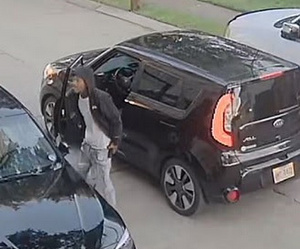 After a man smashed the window of a car parked on Chestnut Street to steal the electronics inside it earlier this week, detectives have obtained and released high-definition surveillance video and images they hope will lead them to a suspect, New Orleans police said.

Shortly before 6:30 a.m. Sunday, Aug. 11, a black Kia SUV pulled alongside a parked car in the 5800 block of Chestnut Street, according to a NOPD report.

“The driver of the Kia – a thin black male wearing a black hooded jacket, skinny blue jeans and white tennis shoes – is seen using a window punch to shatter the victim’s driver door window before stealing Apple air pods from the interior of the vehicle,” the report states.

The back-seat passenger on the driver’s side can also be seen in the video, the report notes. Although he is wearing a mask, tattoos can be seen on his left arm, the report states.