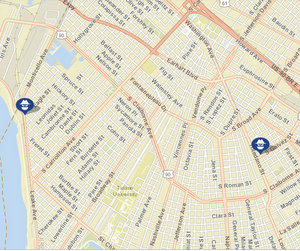 Robberies at gunpoint reported on Oak Street and Washington Avenue. (map via NOPD)

Shortly before 7:30 p.m. Saturday (Aug. 10), a man in his 50s was in his vehicle near Washington Avenue and South Galvez when an armed man got in and demanded his belongings, according to the initial NOPD report. He also ordered the victim to start driving, then later got out and left, the report states.

Just before 6 a.m. Sunday, a 50-year-old man was at Oak and Eagle streets when a stranger demanded his belonging at gunpoint and then left, the report in that case states.

A robbery at knifepoint was also reported on St. Charles Avenue around the same time, police reports show. A man in his 60s was near Erato street when a woman threatened him with a knife and demanded his money, but he got the knife away from her and she fled, the report states.