“It really changed the city,” said Charleston. “I felt like after the win, I was adopted by New Orleans.”

The immediate take after speaking with Charleston is shockingly different from the television series. At odds with the somewhat hesitant and frequently distressed characterization on the series, is the real Charleston, one who punctuates almost every sentence with laughter.

Once you can find a way through his busy schedule to talk to him, that is. Charleston is currently juggling his position at the Ochsner Performance Training, coaching children’s sports through the Boys and Girls Club of America, and prepping for a move back to New Orleans.

The instant takeaway is an upbeat, articulate man with a plan that matches his MBA.

“His story is awesome in that he was not a highly recruited high school player coming out of Oregon, goes to Idaho State, goes undrafted into the pros, signs a Football Association contract, gets cut twice, signs with Saints, and plays four seasons and wins a Super Bowl,” said Mike Detillier, WWL New Orleans sports radio host and ESPN college and pro-football analyst.

Detillier, who has covered Charleston’s career since its infancy, says he is dismayed at seeing Bravo’s recent attempt to turn a great “American small-town boy makes good” story into something inauthentic. He says they’re trying to create a false narrative at Charleston’s expense to inflate his ex.

Charleston recently traveled to Nicholls State University to work with a multi-high school football camp at the request of Detillier. Former Saints teammates Randall Gay, Schuyler Green, and Marvin Favorite were also on the field.

Charleston’s schedule is to full to list, but he also just volunteered with the East Jefferson High School accelerated Physical Education program, which he hopes will lead to his coaching with the local Special Olympics. 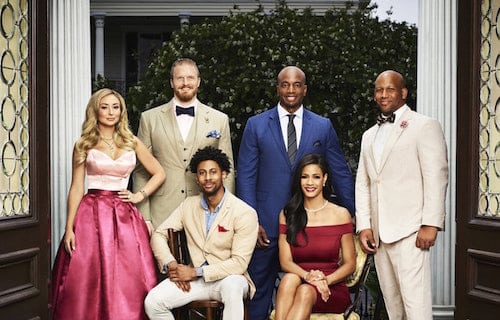 When asked about his reaction to watching last fall’s filming of the Bravo series, Charleston is nonplussed and says he feels great. He is quick to explain that was then; this is now.

He is quick to point out that he was not supposed to be cast-member, he says it just evolved. He feels like the series finale shows him where he is now: on top.

“The hardest part of filming is having to relive tough moments that were filmed for television aired 6 to 8 months later,” said Charleston.

All in all, Charleston is happy with the series and sees it as an adventure—one he laughs about more than anything. He knows TV from reality and says the cast members were his real friends even before they began filming. But he is also quick to add that, like everyone, he has multiple sets of friends.

When he’s hanging out with cast members, he spends the most of his time with the guys: Barry Smith, Jon Moody, and Justin Reese. He says Tamica has been a great friend during his transition.

All of that said, Charleston is still learning that an authentic take is not necessarily an honest edit. Local friends of the star are dismissive of his series portrayal and claim it is inaccurate, particularly the falsehood that he has a drinking problem.

Other cast members interviewed concur that scenes were dramatized and recut to create sympathy in an attempt to ease audience response to another character’s shocking plot twists.

Locals enmeshed in the Hollywood South scene say the production company is pushing his ex as the heroine of the series. To that end, they are pushing money for positive publicity in national gossip rags.

However, if social media feedback and White Linen Night are any indications, viewers seem to have bypassed the spin. The new series favorite is Charleston. He recently took part in New Orleans annual art walk gala and was bombarded with viewers requesting photographs with the former Saint—all vocally proclaiming themselves #TeamJeff. 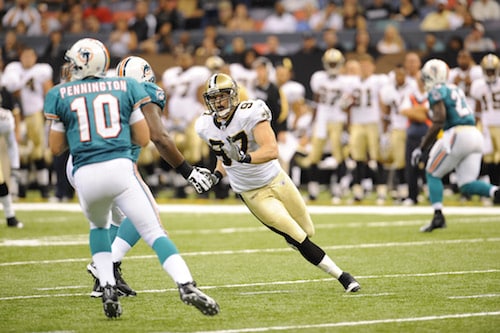 Charleston, who grew up on a ranch in Oregon, says he’s been active his entire life.

“If I wasn’t playing sports, I was feeding animals on the farm and hauling hay in the summers,” said Charleston. “Since the age of fifteen, I always had a job involving manual labor on dairy farms or working on my parent’s ranch.”

This work ethic and love of physicality mesh well with his second career as a coach who trains professional athletes.

Charleston says he got into NFL the hard way and his determination and work ethic played a part. He says he started at Western Oregon University and after three years walked on at Idaho State.

“With only one year to play I knew if I was going to get looked at by the NFL, I had to make an impact,” said Charleston. “My senior year I ended up a Buc Buchanan runner up and was voted to be on the all American team.”

Charleston, then undrafted, ended up at the Houston Texans and was cut after training camp. He spent the next year back in Oregon patiently working in a hospital lab and hitting the gym and training.

What followed was a call back from the Indianapolis Colts in 2006, the year they won the Super Bowl. He ended up making the team after they cut two defensive ends from their Super Bowl-winning team and kept Charleston. He says that by the end of that year he ended up starting three games as a defensive end.

The next year he was released from the Colts and picked up by the New Orleans Saints in week five of the 2008 season. “I arrived in New Orleans and played ten games for the saints that year,” said Charleston. “We went 8-8 and missed the playoffs. But, the highlight of that year was going overseas and playing in London against the San Diego Chargers.”

After the broadcast of last year’s personal upheaval in his life related to a sudden divorce and the hastily required re-marriage of his enceinte ex-wife, Reagan Charleston, also on the series, Charleston has moved on and is looking at real estate back in New Orleans.

Until the move, Charleston can be found training athletes on the Ochsner Northshore campus. An uber-healthy Charleston says he enjoys inspiring athletes and adults to push themselves through every workout.

After a career of traveling the country training at the collegiate and professional level with the best strength coaches in the industry at his disposal, he was ready to share what he learned.

He says his initial move to Covington, Louisiana was to accommodate the wishes of his then-girlfriend Reagan Tucker, who lived on the Northshore and who was from the area.

His involvement in the Northshore community has led to his coaching and training the Mandeville High School football team this summer through Ochsner. He says he recruited Mike Mauti, a former Mandeville High alum and Saints player to help him out.

“I also spent six weeks this spring working with Boys and Girls Club of Slidell to run a flag football program through the NFL and Up2Us Sports,” said Charleston. “I had a great time motivating the kids and getting them to compete with intensity and teaching them mental toughness and sportsmanship.”

Up2Us Sports is a non-profit that engages coaches to train youth and serve as mentors and role models to youth living in some of America’s underserved communities. “I will always be giving back to youth football,” said Charleston.

Back to the Crescent City

Locals will soon be able to find Charleston leaning on the Uptown counter of Domilise’s ordering or Verti Marte for his favorite fried oyster po-boy if the craving hits while he’s in the French Quarter.

During the interview, he was busy packing and reading to list the same Northshore house he purchased after he blew out his elbow in the 2012 Saints playoff game. He reminisced about the culture and missing his favorite part of New Orleans social culture, the seafood boils. He says he is a fan of the city’s crawfish, shrimp, and crab boils.

“I’m very excited to make the move back to New Orleans,” says Charleston. “But I’ll miss skateboarding the St. Tammany Trace on my longboard. I’ll have to visit and come back a lot.”

The Saturday before the series second finale, a busy Charleston had thoughts on his mind other than celebrity. He was on his way to work with more local children harboring football dreams.

Charleston’s last words were that he was running out the door of his packed house to coach the Christian Brothers High School football camp starting at the Camp Abbey Retreat in nearby Covington.

“I’ve also started riding motorcycles again, and I’m planning on taking a four-week ride soon,” said Charleston. “I’ve been on a lot of road trips around America in a car but never on a motorcycle. I’m pumped to go and explore national parks and explore some other states.”