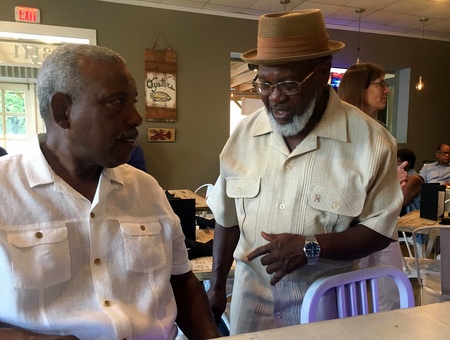 It’s time to put up or shut up.

Louisiana’s election season begins in earnest next Tuesday with qualifying for statewide offices and the 144 members of the Louisiana House and Senate. Dozens of prospective candidates will be trekking to their parish Clerk of Court or to the Louisiana Secretary of State before the Thursday 4:30 p.m. deadline. They will bring the appropriate cash, cashier’s check or money order (no credit cards or personal checks accepted) and swear that they really reside where they are registered and that all their taxes are paid in full. Those who perjure themselves – and these days there is usually someone – are quickly challenged in court.

New Orleans voters will help select 16 House and Senate members. Some legislators, like Royce Duplessis (who was elected to fill Helena Moreno unexpired term last year), are running for re-election. Others in that group include Wesley Bishop, Karen Carter Peterson, Troy Carter, Gary Carter, Jimmy Harris, Stephanie Hilferty, Ray Garafalo, Chris Leopold and Sharon Hewitt. Garafalo, Leopold and Hewitt only represent a small percentage of Orleans Parish voters with the majority of their districts in other parishes. Most of the non-term-limited legislators should have relatively easy re-election campaigns. On the other hand, Hilferty – a popular Lakeview mother and Realtor – has already drawn two strong opponents who have been aggressively campaigning.

The larger contests will be for the open seats being vacated by term-limited legislators J.P. Morrell, Walt Leger, Conrad Appel and Neil Abramson – several of whom have made invaluable contributions to our quality of life. In some races five or more candidates have expressed an interest in qualifying. Leger is being honored next week by a broad cross section of individuals who want to give him a special thanks. Two additional legislative seats in Gentilly and New Orleans East have become open because Rep. Joe Bouie and Rep. John Bagneris are both seeking the Senate seat being vacated by Morrell. These are also multi-parish seats that require candidates to develop new constituencies with voters who might have different priorities.

Though several local legislative candidates have already built substantial war chests and hired full staff, fundraising is now ramping up. Super donor and money gatherer Darleen Jacobs is hosting a pre-qualifying cocktail reception for State House candidate Mandie Landry at the House of the Rising Sun on Monday night. Jacob’s events always include champagne and a lavish buffet. Following in the footsteps of LaToya Cantrell and Jay Banks, Kea Sherman is hosting a Freret Street pizza bash to celebrate her candidacy on Tuesday evening. Friends of Carling Dinkler IV will be gathering Wednesday evening at The Alder to full his coffers.

While some political organizations have quietly selected their preferred candidates, many like the Alliance for Good Government and the parish Democratic and Republican executive committees are now setting dates for forums. Last night several legislative candidates addressed a coalition of organizations interested in education and incarceration including Step Up Louisiana, Bar-None.Net, Families and Friends of Louisiana’s Incarcerated Youth, Ubuntu Village and activist Alicia Plummer Clivins.

Legislative candidates were also making the rounds at presidential debate watch parties this week where the faithful gathered to cheer on their favorites. The Democratic presidential candidates have been so busy attacking each other – especially frontrunner Joe Biden – that they have hardly focused on what to offer voters who previously supported President Trump. In turn, Trump has co-opted Hillary Clinton’s “Stronger Together” 2016 campaign theme and made it his own. While Biden is still retaining his lead in the polls, the campaign has obviously tightened. Minor candidates will be fading away soon with the main four contenders coming into strong focus – Biden, Harris, Sanders and Warren. Sanders and Warren represent the more liberal wing of the party. The majority of voters who could vote Democratic in 2020 – including more independent swing voters -are probably more comfortable with mainstreamers Biden or Harris. Several of last night’s debate watch party attendees were already predicting a Biden-Harris ticket. 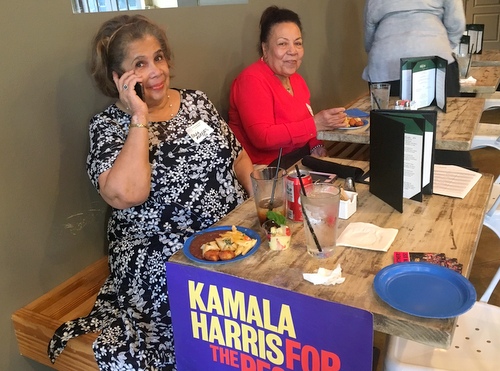 Maria Tio and Gail Glapion show their support for Kamala Harris at a debate-watch party Wednesday. (photo by Danae Columbus for UptownMessenger.com)

A recent WSJ/NBC poll show that Biden handily beats Trump (49% to 17%)in a match up among voters who sometimes side with either party. Persuadable voters now represent as much as 15% or 20% of the U.S. electorate, according to the Wall Street Journal. Both national parties are identifying tactics to lure swing voters. According to the political research firm Catalist, swing voters were crucial to Democratic success in the 2018 midterm election. Democrats might also be depending on new voters who have recently entered the electorate. More of that group voted Democrat than Republican in 2018.

Presidential candidates are already eyeing the voting dynamic in Iowa, the first state on the nomination calendar. Older voters 50 and up are crucial to victory there. According to the PEW Research Center, nearly a quarter of the 2020 electorate will be ages 65 and older, the highest such share since at least 1970. Those 50 and older accounted for 58% of Democratic caucus goers in 2016, according to exit polls reported in the Wall Street Journal.

Four hundred years ago this week, America’s first representative body in the new world was elected in Jamestown, Virginia. Those 22 colonists began a tradition of public service that continues today. Though it started with lofty goals, America’s democracy is under attack from the left and the right on foreign and domestic fronts. It’s often hard to keep up with everyone who has something bad to say. Regardless of its detractors, American democracy is still the best form of government anywhere in the world.

As the number of fire weapon owners continue to increase, so does the rate of domestic violence homicides, according to a new state by state study published in the American Journal of Preventive Medicine. Because women most often fall victim to domestic violence, they are at a higher risk. The study reaffirms a well-known connection between access to guns and abusive relationships turning deadly, according to the New York Times. Women should consider taking gun safety training classes to be better able to defuse potential attacks.