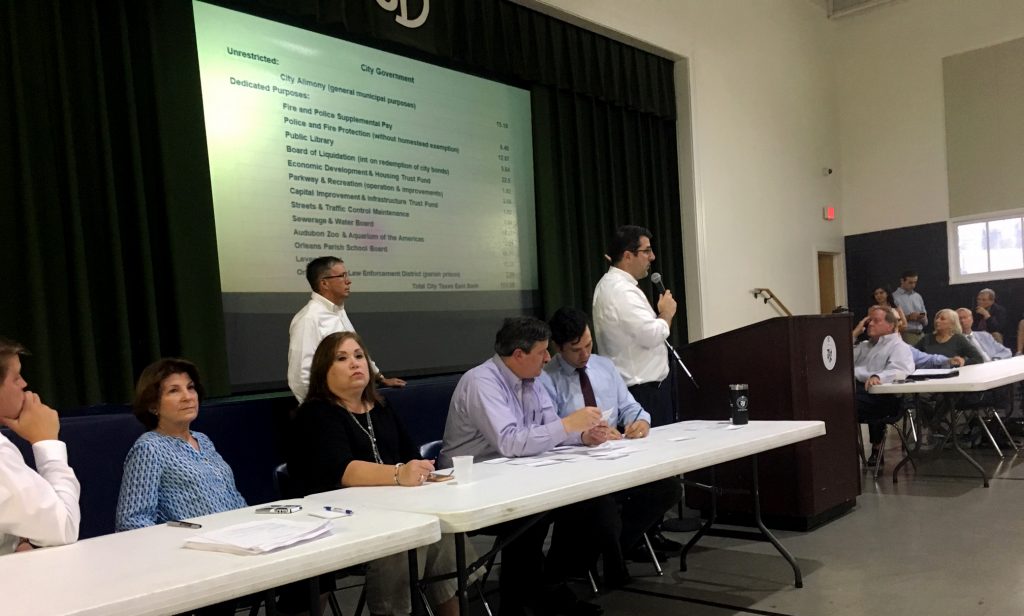 The math is simple: Higher assessments plus higher millage rates equal higher property taxes. In neighborhood after neighborhood, residents are meeting to learn the ins and outs of filing property tax appeals by the Aug. 22 deadline.

“This is obviously a white-hot issue,” said District A Councilman Joe Giarrusso to the more than 400 lake area residents who gathered at St. Dominic’s School on Tuesday night. “I’ve never seen so many people at a Lakeview Civic Association meeting.” 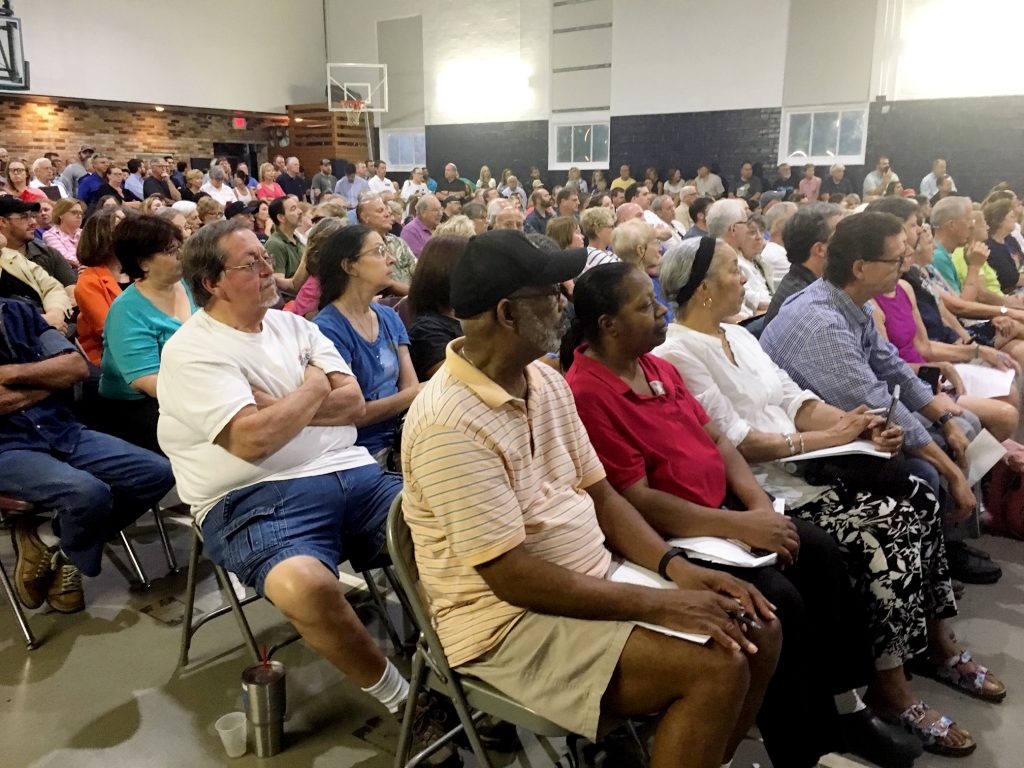 Across town, Councilwoman Kristin Gisleson Palmer fielded a steady stream of questions from her east bank constituents. Concerned residents in the Fairgrounds Triangle area and Mid-City met Monday. Additional meetings are scheduled in Lower 9th Ward, the Tulane and Canal corridor and at the 7th Ward’s Corpus Christi Resource Center.

The uproar is not just about how property taxes reached an all-time high or why the sacred homestead exemption appears stuck at $75,000. It’s also a deeper issue about millage and accountability — which city departments (fire, police, parks, etc) and outside public agencies (Orleans Parish School Board, Orleans Levee District, etc.) receive millage and how much control the mayor and council actually have regarding spending.

The Orleans Parish School Board has scheduled a public hearing on Sept. 26 to discuss levying additional or increased millage without voter approval, which could yield them an additional $3 million.

There have always been property tax appeals, but never at the rate that will be seen this fall. Some property owners are double-checking that their homestead exemptions are properly filed. Others over the age of 65 who can prove they earn less than $77,000 per year are scrambling to file for a freeze at their 2019 rate.

It is also not know how many extra hours the council might spend to hear the formal appeals and how many homeowners will seek redress from the State Tax Commission, the final stop in the process. Constituents at Tuesday’s meeting also voiced their concern that Orleans Parish assessor Erroll G. Williams and his team of certified appraisers depended too heavily on a computer-assisted mapping program to help determine property and building values.

“They didn’t have to tax us at maximum value,” said one property owner. It was also unrealistic to assume Williams and his staff could personally evaluate more than 160,000 residential and commercial properties this year. If fact, 40,000 property owners are getting a one year reprieve.

When asked about the homestead exemption’s $75,000 cap, District 94 State Rep. Stephanie Hilferty pledged to support legislation that would allow each parish to call a local option election for voters to determine their parish’s specific exemption.

District B Councilman Jay Banks used social media rather than a town-hall style meeting to communicate with constituents about the appeal process. Banks says his staff is preparing a resolution that would ask the city and the State Legislature to change the law as to when a higher property tax payment would be due.

“Property owners should not have to pay a higher tax until the value of their investment is captured,” he explained. Banks believes that even if the neighborhood surrounding a home is improving, the owners of an non-improved house should not be forced to pay the new rate until they sell their property. “Assess it now. Acknowledge and record its increased value but don’t tax the property owner on that value until the house is sold,” Banks continued.

Expect this issue to get even hotter when property owners begin focusing on the Infrastructure and Funding Plan proposal Mayor LaToya Cantrell and the City Council are committed to placing on the November 2019 ballot. Next week, Deputy CAO Ramsey Green and S&WB director Ghassan Korban will be gauging support from CBD property owners, many of whom already pay the city’s highest taxes per square foot.

It would be wise for the mayor and council to postpone the November millage election until sometime next year. Before then, voters may demand re-evaluation and stronger oversight of the entire millage process.

Perhaps it is also time to take a fresh look at all the hundreds of schools, churches and nonprofits that pay no property tax at all even when they rent out a portion of their property to a for-profit entity. If these property owners paid even a small percentage of what would be due, it could ease the tax burden on everyone else.

This year’s property tax crisis is a wake-up call for City Hall. Before Williams was elected New Orleans’ single assessor, assessment levels varied district to district. Under Williams, there has been a strong push not only to equalize assessments but also ensure that city government receives every possible dollar. While the city definitely needs money, our elected officials might decide to revisit exactly who should pay and how much.

District B Councilman Jay Banks, who heads the BOLD political organization, says his group did not put Candace Newell in the House District 99 race against Adonis Expose. “Candace was in the race first. She asked Adonis to help her,” explained Banks. Both Expose and Banks are former Kings of Zulu.

“There is no Zulu King war,” Banks said. “Adonis has been my friend for decades. I crowned him King Zulu. He was Mayor when I was Big Shot, and we are fraternity brothers. Adonis even stayed in my Baton Rouge home after Hurricane Gustav.”

Banks believes that BOLD is the “Consumer Reports” of politics. “We recommend the best qualified candidates who will make the greatest impact in the community, and we have the best record of doing so.” Banks says BOLD has a successful history of endorsing candidates statewide. “Candace will be an excellent state representative,” Banks concluded.

The Hayride, a news and commentary blog, founded in December 2009, that puts a conservative slant on Southern politics and culture, is holding its annual fundraising extravaganza tonight at the Metairie Country Club.

Former Louisiana Republican Party chair Roger Villere is hosting a fundraiser tonight for the Alliance For Quality In Government (AFQIG) featuring best-selling authors and former Trump advisers Corey Lewandowski and David Bossie. These guys delivered insightful remarks during their book tour stop in Metairie last year. The event will be held at Cars of Yesteryear, 4625 Fairfield, and will feature a private collection of 200 vehicles.

Gubernatorial candidate and U.S. Rep. Ralph Abraham will bring his campaign to the Home Defense Foundation tonight at 7 p.m. at the Knights of Columbus Hall, 6254 Vicksburg. Abraham’s appearance is free and open to the public.

Celebrations are taking place in New Orleans and around the world to today to remember the 250th birthday of statesman and military leader Napoleon Bonaparte. Bonaparte made an indelible mark on New Orleans by facilitating the Louisiana Purchase, by creating the Napoleonic Code, which is still the foundation of civil law in Louisiana, and by spurring the construction of the Napoleon House where New Orleanians and visitors alike still enjoy a refreshing cocktail. The Louisiana State Museum is also home to one of Napoleon’s death masks. Rau Antiques will be serving Champagne and desserts today in Napoleon’s honor. Bon anniversaire!