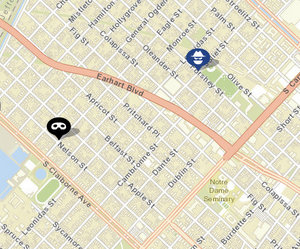 A burglar shot at the residents he found inside the Eagle Street home he was breaking into Friday, and another man was robbed of a motorcycle by the person he met to sell it to on Joliet Street, New Orleans police said in weekend crime reports.

Around 12:15 a.m. Friday, July 26, three people — a man and a woman both in their mid 30s, and a 20-year man — were at home in the 2500 block of Eagle Street (near Nelson Street) when a stranger came in through a back window, according to the initial NOPD report. One of the residents confronted the intruder, who then drew a gun and demanded their belongings, the report states.

The gunman then fired two shots and left the home through the rear, the report states.

Around 9 p.m. Friday, a man in his 30s met another person near Joliet and Forshey streets to sell a motorcycle, according to the report in that case.

“The victim was hit in the back of the head with a weapon and the suspect fled with the motorcycle in an unknown direction,” the report states.