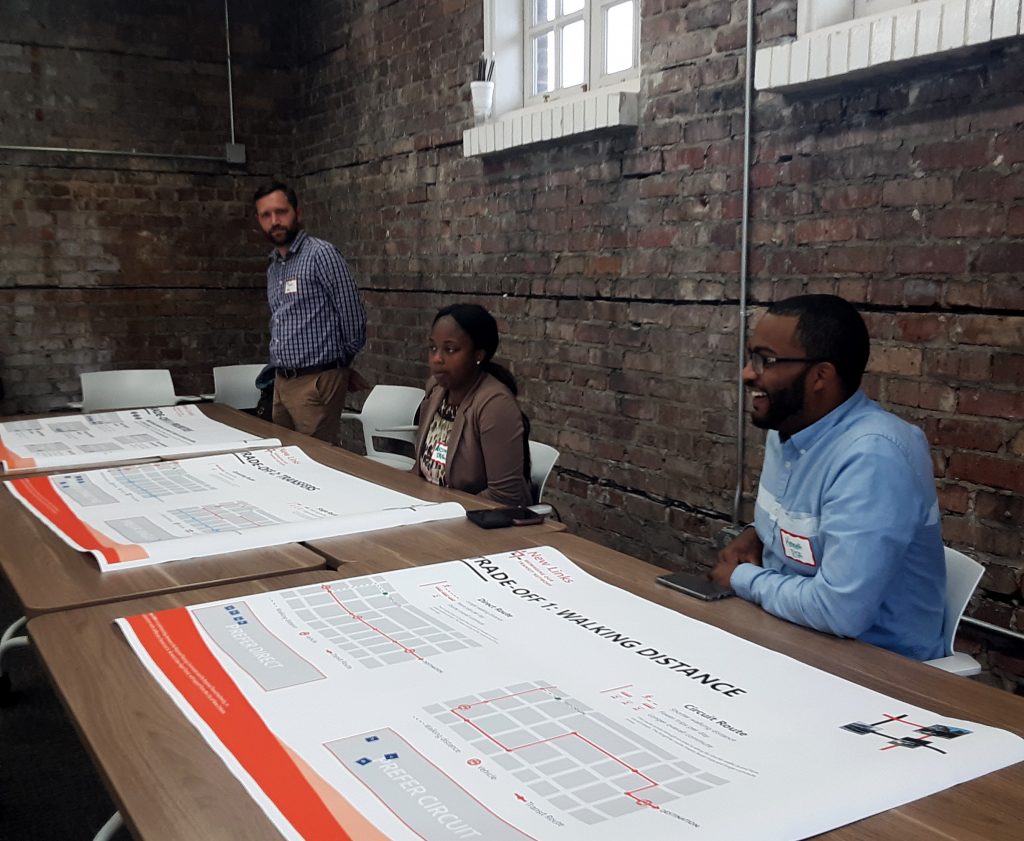 Planning officials discuss the overhaul of the public transit system at a meeting for District B residents in the Dryades Public Market on Oretha Castle Haley Boulevard. (Jesse Baum, Uptown Messenger)

The Regional Transit Authority and the Regional Planning Committee hosted a community meeting Tuesday for District B at Dryades Public Market to gather feedback for a planned redesign of the public transit network that would include New Orleans and the surrounding communities. 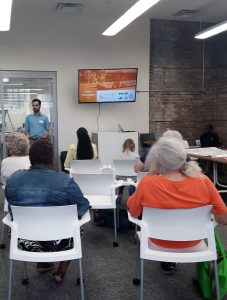 The current input phase of the redesign looks at where people in New Orleans travel most frequently and how they would like to see transit improved, including more options for transfers, better weekend/late night service, as well as better connections to communities like Chalmette and Metairie.

In the years after Hurricane Katrina and the levee failures, the RTA has seen ridership fall and has struggled to restore service to prestorm levels. After losing most of the bus fleet in the flooding, there are still fewer buses running in New Orleans than before the storm.

There are now only five lines that run every 15 minutes, whereas there used to be 19. Though ridership and the New Orleans population overall have both dropped, there are now more lower-wage workers living in the communities surrounding New Orleans who use public transit to commute to the city.

And though the bus service is concentrated around the 9-to-5 weekday schedule, tens of thousands of people in the New Orleans area work in the hospitality sector, where shifts can end in the middle of the night or early morning.

The series of planning events are open-house style; people can drop in to participate throughout the event. The activities and information session are meant to take about 20-30 minutes to complete.

At the meeting, attendees were each given a packet of materials with a set of stickers for them to use in interactive displays about changing the transit system. Using the stickers, participants can vote on what they want to see most in the redesign, such as more frequent streetcar and bus stops versus more express lines, where they travel to most within the city, and which options are most important to them: more reliable service, more frequent service, faster service, more weekend service, more late-night service or better regional connections.

According to Jennifer Brady, who conducts outreach for the RTA, the RTA is surveying people at bus stops, including Elk Place and Canal Street, the largest transfer point in the city, so that people who cannot attend the meetings are able to provide feedback for the redesign.

The survey asks about how frequently people ride the bus and streetcar, what other transit options they use, as well as what they would most like to see change within the current transit system.

Houston recently completed a transit overhaul that altered nearly every bus line within its system, and converted the system from a spoke-and-hub model where transfers run through one central point — like Canal Street in New Orleans — to a grid-style with multiple opportunities for transfers. Weekend and night service was expanded, and ridership has since increased.

The New Links project is currently in its initial data collection phase. Phase two, evaluating feedback and drafting the recommendations, will take place in the fall, and the recommendations and design will be finalized in the fall through winter, when the project team will also present the design to the public.

“This is an opportunity for input,” said RTA board member Fred Neal. When asked how the redesign could entice more people to use public transit, Neal said: “We want input from everyone, not just [current] riders.”

There will be eight more meetings throughout the metro area to provide feedback for the redesign.