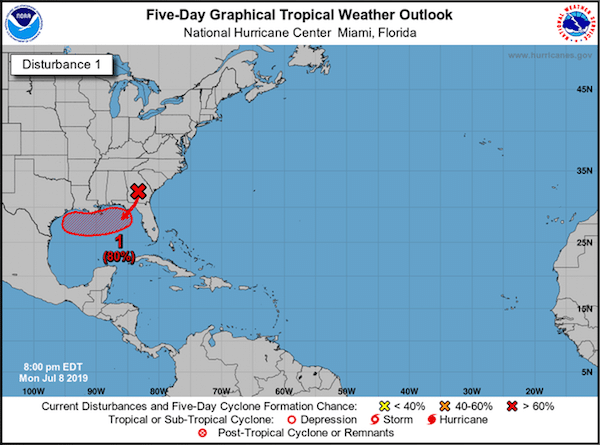 via US National Weather Service

Heavy rain is expected in New Orleans this weekend as showers over the Florida Panhandle are moving into the Gulf of Mexico and developing into stronger storm system, the National Hurricane Center warned Tuesday morning.

The storm system is expected to enter the Gulf of Mexico today (July 9), and could become a tropical depression Wednesday or Thursday while continuing to move west, forecasters with the National Hurricane Center said in an advisory at 6 a.m. Tuesday.

“Once the system is over water, environmental conditions are expected to be conducive for tropical cyclone formation,” the advisory reads. “Regardless of whether or not a tropical cyclone forms, this system has the potential to produce heavy rainfall along portions of the northern and eastern U.S. Gulf Coast later this week.”

The city of New Orleans encouraged residents to be prepared for heavy rain, though the amounts will be difficult to predict until the storm organizes further. The city has 118 of its 120 pumps “available,” the news release notes.

“While it is too soon to forecast local impacts to the New Orleans area, the City of New Orleans encourages residents to review hurricane plans and prepare for rain, which is likely regardless of tropical development,” according to a news release from Mayor LaToya Cantrell’s office.

City workers are working to clear clogged catch basins and flush drain lines in flood-prone areas, and residents should examine storm drains and gutters near their homes for debris that can be removed as well. Clogged drains should be reported to 311.