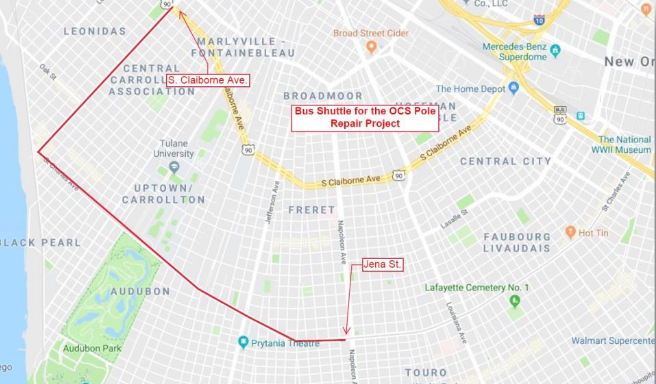 Nearly half of the St. Charles Avenue streetcar line will shut down for repairs beginning July 15, the Regional Transit Authority announced.

It will stay closed for about two months while crews replace 15 corroded poles along the uptown section of the line from Jena Street to the terminus at South Carrollton and Claiborne avenues. The poles hold up the overhead lines that supply electricity to the streetcar.

The partial closure will begin at 5 a.m. on Monday, July 15, and continue until mid-September.

Buses will take passengers from Jena Street, near Napoleon Avenue, through the closed section of the line. The repairs aren’t expected to affect traffic along the line, the RTA states.

The St. Charles streetcar, a tourist attraction in itself, is the oldest component of the RTA and one of the oldest continuously operating streetcar lines in the world. It began carrying passengers from New Orleans to the suburb of Carrollton in 1835.

All RTA service alerts, updates, and detours can also be accessed by downloading RTA’s GoMobile app. To learn more, visit www.RTAforward.org or call Ride Line at 504-248-3900.

Corrosion on the overhead catenary system poles. (via RTA)