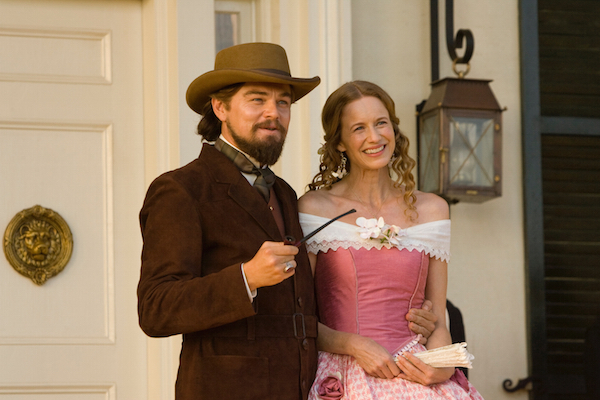 That cheerful, tall, lanky strawberry blonde – and avid Saints fan – you see at the Superdome and walking down Magazine Street looks familiar because she is. Actress Laura Cayouette traded Hollywood for Hollywood South nine years ago and hasn’t looked back, much.

“After my first Carnival season as a resident, I called my mother and told her I wanted to sue her for child abuse,” said Cayouette. “I said I wanted to file charges for them not raising me here.”

That year was the year of the Black and Gold Super Bowl. “It was the greatest Carnival in the history of the city,” said Cayouette.

Cayouette is currently awaiting the release of two local films: “American Reject” and “One Month Out.” Her co-stars include Louisiana transplant and actor-filmmaker John Schneider, and local actor and friend to Cayouette, Uptown-based actor Bryan Batt of “Mad Men,” who is the star character in her second mystery book, “The Hidden Huntsman.”

Anyone who has seen “Django” remembers the antebellum splintering shootout near the end of the film. “Now, tell Miss Lara goodbye,” is the iconic Jamie Foxx dialogue that prefaces Cayouette’s dainty but bloodied hoop-skirted figure shot, splattered, and violently jerked through the air.

There’s a filmmaking anecdote behind that scene.

“Quentin is a film purist, nowadays you can achieve that scene in so many technical ways, but, no,” said Cayouette. “There was a guy on a ladder holding a rope, and he would literally jump off the ladder and I would fly backward. We filmed it four times the first day, and I thought we were done.”

Cayouette recounts she didn’t realize she was sore from the previous day of being repeatedly yanked into a mat held like a catcher’s mitt by four stunt guys. But they began again. Corset, gown, hoopskirt, blood, explosive squibs, pulleys, rope, ladder, and Cayouette flying backward like a ragdoll. Such is the workday of a professional actress.

To date, Cayouette has been featured in four Tarantino-produced films.

Mardi Gras and Ardent Who Dat

I thought I first saw Cayouette on the Thoth parade route strutting her stuff in her bright pink wig, matching corset and fishnets as part of the New Orleans’ illustrious Pussyfooter marching club. Millions have seen Cayouette parading down the streets of New Orleans in fishnets although they may not know it.

“I was asked to be a Pussyfooter, and I didn’t know it was so hard to get in,” said Cayouette. “It’s an honor. It’s also a nonprofit with events year-round. It’s so much fun.”

It was Cayouette who was responsible for arranging for A-list Tarantino to preside over the Krewe of Orpheus during Mardi Gras 2014.

“I got Quentin to be the monarch,” said Cayouette. “Yes, it was me. We rode along on the monarch float and went to the ball afterward, which was so much fun.”

On a local level — and she is a local now — Cayouette is a Saints and Pelicans season ticket holder who rarely misses a game. She is a passionate Who Dat, furious with the NFL — and not only about the missed call regarding the Saints’ playoff game. She is quite serious and informed when she speaks about sports-related brain injuries and fiercely protective of the players.

“There were three helmet-to-helmet interactions in that game, not one, and not two, I saw it,” said the actress. “It’s serious, it’s brain injuries. Just look at Steve Gleason.”

Cayouette, who was raised in Laurel, MD, has deep roots in Louisiana, although she’d never resided here permanently until after Hurricane Katrina. Both of her parents are from Louisiana — they met at LSU — and the actress says that she has an ancestor that lived on the city’s later-named St. Charles Avenue in the 1700s.

Laura, like most of Hollywood in residence, hides in plain sight amongst other New Orleanians. However, if you look closely, she might be the cheerful redhead standing in front of you at Breaux Mart – I won’t say which one.

Before becoming a local, for over 20 years, the actress, writer, blogger, director, and producer used to straddle two cities, Hollywood and Hollywood South. Now, she lives and works in New Orleans.

In that time, Cayouette has acted in high-profile films such as “Now You See Me,” “Kill Bill Vol.2,” and “Enemy of the State.” She has filmed 45 movies and 16 television shows, according to IMDB.com. Soon to be 17 TV credits when Hot Date airs.

Locals might best remember her from “Tremé,” but she also has a following from appearing in HBO’s “True Detective.” TV buffs cite Cayouette as Ross’s first date on the episode of “Friends” after the Rachel break-up (not the “we were on a break” episode). 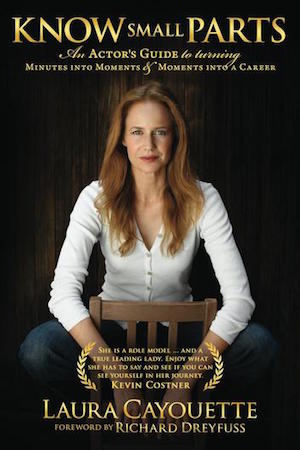 Her interesting insider’s book on acting and the acting world, “Know Small Parts: An Actor’s Guide to Turning Minutes into Moments and Moments into a Career,” includes endorsements by actors Kevin Costner, Lou Diamond Phillips, and Richard Dreyfuss. “She’s nailed the daily life of an actor in L.A. about as perfectly detailed as it gets,” says Dreyfuss on her book jacket.

Actor and longtime friend Kevin Costner describes the actress as a true leading lady. “Laura’s outward beauty could have guaranteed her much more in this business, perhaps worldwide fame. She could have taken an easier route, but instead chose to make it about the work,” says Costner on the book-jacket of Know Small Parts.

Cayouette is also the author of a series New Orleans based mystery novels set around the Black and Gold Super Bowl. I can recommend them as great beach reading for the NOLA crowd who enjoy the local color that only a New Orleanian truly appreciates. A definite rainy day or Destin read for anyone who appreciates the craziness of New Orleans’ own special vibe and culture.

The series continues through 2013 with each book highlighting cultural events like Jazz Fest, Southern Decadence, our Mardi Gras Indians Super Sunday, and St. Patrick’s Day, as well as moments like the BP oil spill and Hurricane Isaac.

Regarding her acting work, the actress shared her earliest moments with me as an actor and the two epiphanies that changed her career.

The first anecdote describes her dedication to her craft at the age of 31, an age when most women’s careers are winding down in the industry. It took place at an audition for a small part. At the callback, the director asked her to play the role the way it was written, and she did. But then, he asked her to play it another way, then another.

She says she was ready for everything and had rehearsed and was prepared for whatever they threw at her: any personality, any accent, any age, anything. She didn’t get that part she auditioned for, but her preparedness was memorable enough for another part.

“I got a call, and my agent said the writer/director couldn’t sleep at night, so he wrote a part just for me,” said Cayouette.

Her second “aha moment” occurred on the same film, “The Evening Star,” the sequel to “Terms of Endearment” starring Shirley MacLaine.

That was the day she learned, “preparing and good acting wasn’t enough, I had to learn to be memorable, to literally make the cut,” said Cayouette.

“I did know that day we were shooting that Shirley was stealing the scene right out from under all of us – with no lines! She was supposed to be a member of the studio audience watching us shoot a TV show in the movie and when I saw what she was doing with her clapping… she filled the moment so richly that it was obvious she’d stolen our scene. I watched and learned,” said Cayouette.

Although the part was written for her and later cut down to one short line – “Bye.” – the lesson she learned from MacLaine took. Years later, executive producer of “Love in the Time of Cholera,” Scott LaSatie would say of Cayouette, “Laura has created an entire career out of stealing scenes and making moments.”

Local film producer Sherri Strain, who worked with the actress recently on the locally filmed “Bad Stepmother,” echoes that early casting director’s observation. “No matter how large or small the role, Laura’s professionalism, preparation, and work ethic are extraordinary. She does the work, and she arrives prepared. She makes it easier for everyone else,” said Strain.

The still extremely youthful-looking Cayouette says she now relishes character roles, and with New Orleans and Louisiana’s booming film industry, she can have a successful acting career here.

“I will tell you, one of the gifts of aging in our industry is that I have gone into a zone now where the characters I play might be more interesting because I’m older. Because the characters they write for women in their 20s and 30s, which I played for 20 years, it’s not as rich of a territory to tread. And now, you know, I get to play a little more variety and character work.”

All of these local roles exist locally for a reason. Post-Katrina tax incentives geared toward the film and television industry, have led to more than 100 T.V. series and films produced in New Orleans in the past decade, and movie crews are now part of the local landscape. It is not uncommon to see actors in local shops on a weekly basis.

Television series currently in production include “Queen of the South,” “Filthy Rich,” the new Kim Cattrall vehicle, “Claws,” “Queen Sugar” and “NCIS: New Orleans,” per the Louisiana Film Commission website. “Filming is definitely on the uptick,” said Amelia Miley of Coulon Casting, currently in pre-production on several film projects. Despite the ever-changing rules of Louisiana state tax-incentives, Hollywood is still ever-present, as the previous Academy Awards season can attest – see “The Green Book.”

“I would also love to rejoin the cast of ‘Queen Sugar,’ ” said the actress, “I hope they find a way to write me back in.”