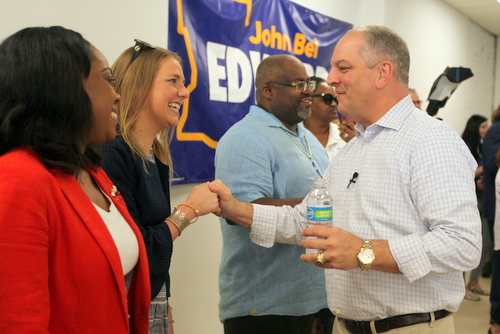 Louisiana Gov. John Bel Edwards kicked off his re-election campaign Monday morning with a rally in the Lower Garden District, drawing a crowd of New Orleans supporters with his message of progress on health care and the economy and promises of more funding for public education.

Edwards, an Army veteran and attorney from Amite who served as a Democrat in the state House of Representatives, was elected governor in 2015 over Republican former U.S. Sen. David Vitter, filling the vacancy left by his term-limited predecessor, Bobby Jindal. On Monday morning, Edwards met with a packed room of supporters on Thalia Street to launch his re-election campaign in New Orleans.

Edwards based the case for re-election on two of his early priorities — expanding health care coverage to thousands of Louisianans under the Affordable Care Act, and filling the budget deficits he said he inherited from the Jindal administration.

“Bobby Jindal is so far in the rearview mirror today we can just about forget about him,” Edwards said.

Edwards also touted a third accomplishment during his first term, the bipartisan embrace of criminal justice reform. No longer, Edwards said, does Louisiana have the highest incarceration rates in the nation.

Ultimately, Edwards said, the state is much better off than it was four years ago.

“I believe our best days are yet to come, and we are going to be in a position of strength to attack the remaining challenges,” Edwards said.

Moving into a second term, Edwards said, his top priority will be expanding early childhood education.

“This is how we will finally close the achievement gap,” Edwards said. “Too many kids are starting kindergarten and they’re not ready to learn.”

Edwards reminded supporters that he had also just signed into law a pay raise for teachers. Other priorities will include increasing the state’s minimum wage above the federally mandated $7.25 per hour and working to raise women’s salaries to close their pay gap with men, he said.

U.S. Rep. Ralph Abraham is the most prominent Republican who has declared a challenge to Edwards, though the formal qualifying period for the gubernatorial election is not until the first week of August. An open primary will be held Oct. 12, and a runoff if needed will be Nov. 16. 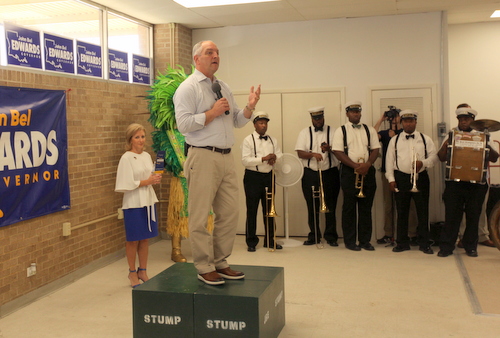 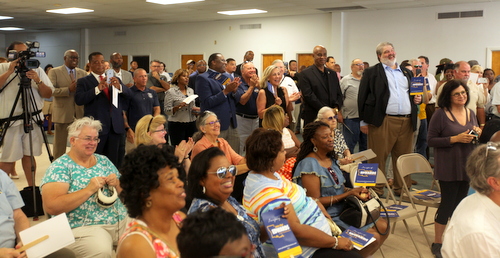 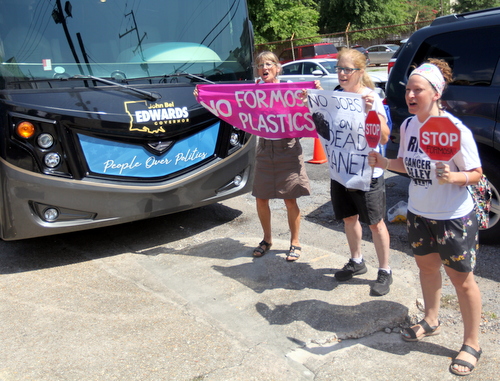 A small group of environmentalists opposed to chemical factories in southern Louisiana chant next to Edwards’ campaign bus outside the rally. (Robert Morris, UptownMessenger.com)