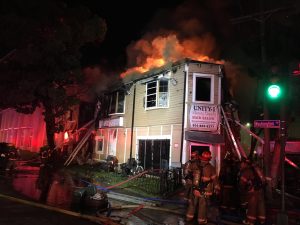 Four New Orleans Police officers were fired Wednesday in connection with a March car chase that ended with the suspect’s vehicle crashing into a Broadmoor salon and starting a fire that killed three people, after an internal investigation revealed “multiple policy violations” and a pattern of unauthorized pursuits, authorities said.

The fired officers are Alex Mikkelsen, Jonathan Broom, Jeffrey Herrington and Alex Florian. All have been with the department for two years except Florian, who had been on the force three years.

Also suspended in the investigation were two more officers, 9-year veteran Colby Stewart and William Hery, who had also been with the department two years. Steward was suspended 44 days and Hery for 54 days.

The chase began on March 20 when officers tried to stop a stolen vehicle, but the driver ignored them and tried to get away, said NOPD spokesman Gary Scheets. The officers began chasing the vehicle in contradiction to NOPD policy and also deactivated their in-car camera, Scheets said.

The stolen vehicle crashed near the intersection of South Broad Street and Washington Avenue and crashed into the Unity One Salon, killing both the driver of the car and a passenger, as well as another person inside the salon, Scheets said.

Mayor LaToya Cantrell — whose work as both a Broadmoor community organizer prior to elected office and as a City Councilwoman often focused directly on revitalizing that intersection — hailed the officers’ firings as an appropriate response by the department to the loss of life.

“What happened on March 20 was a tragedy, and — as we have now confirmed through the investigation of our Public Integrity Bureau — an avoidable one,” said Mayor Cantrell.

All actions have consequences. The individuals responsible are being held accountable, and I am confident that Superintendent Ferguson has responded appropriately and with the level of seriousness required.

Four of our NOPD officers are being terminated, and two more are being disciplined. These individuals violated NOPD policy and procedures, which are in place to prevent these kinds of occurrences. I applaud Chief Ferguson and his leadership team for addressing the matter with transparency, urgency and care. And I thank the hard-working men and women of the NOPD, who are out there every day working to make our City safe.

Lives were lost in this tragedy, and we cannot lose sight of how our residents were impacted. A son lost his mother. Young children lost a teacher whom they loved, and we have to be there for them. There were parents who had to bury their children, and they need our support.

We will hold people accountable, and send the message that these actions will not be tolerated. We are committed to taking care of our community through transparency and accountability.