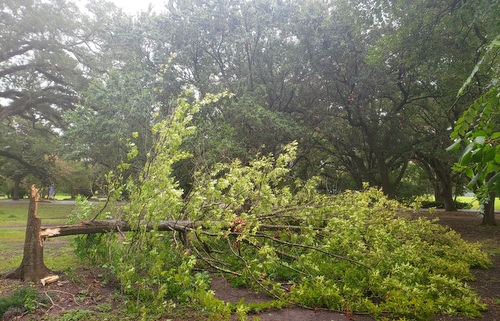 A tree lies on its side Friday morning in Audubon Park as rain clouds fill the sky overhead. The city has responded to 47 tree emergencies related to Barry. (Robert Morris, UptownMessenger.com)

As Barry made landfall today as a Category 1 and then weakened to a tropical storm, the mayor and other city officials told residents to stay the course because the worst may be yet to come.

A tropical storm warning remains in effect for New Orleans.

“To quote the Weather Service, this is just a really weird storm,” City Council President Helena Moreno said during a Saturday press conference. “But because of that, it could be building. Later tonight, we could feel a bigger impact. Don’t let your guard down yet.”

Crews have been out clearing catch basins as the storm approaches, said Ramsey Green, the mayor’s top aide in charge of infrastructure. On Friday alone, the Department of Sanitation pulled 60 tons of debris out of the drainage system.

In Wednesday’s torrential rain, trash cans were toppled and refuge spilled into catch basins. Officials warned residents to secure their trash cans and not to place any debris on the curb. Crews won’t be picking up trash outside the French Quarter and CBD until Monday at the earliest.

The Sewerage & Water Board has 97 of its 99 drainage pumps available for use and has activated Turbine 6, S&WB Executive Director Ghassan Korban said.

Korban also reminded residents that, even with the pumps working full force, it will take time for an inundated street to drain. He said he wanted to counter the idea that if the water isn’t swirling, the pumps aren’t working.

“It takes a long time for the water to recede,” Korban said. “You don’t want to see the water swirling at a 2- or 3-foot level. There is no correlation between the appearance of stillness and the pumps not working.”

Many of the officials praised residents for staying off the streets. “Your cooperation did not go unnoticed,” NOPD Superintendent Shaun Ferguson said. “We are asking you to continue to cooperate with us.”

Some warnings: Never drive in standing water. Do not park or drive on the levees. And respect the barricades the police put up to close streets.

Someone had removed the barricades at Interstate 610 and Franklin Avenue last night, an act the Mayor LaToya Cantrell noted is illegal.

If a street is flooded, officials said, call 911. That number is for life-threatening situations, and a flooded street is considered life threatening.

For downed trees, call 311. If a power line is affected, let the operator know. Parks and Parkways has responded so far to 47 tree emergencies related to the storm system.

Barry still looks like it will bring heavy rain, Cantrell and other officials said.

“Just because the sun is shining now, that does not mean this has passed,” District B Councilman Jay Banks said. “New Orleans, don’t choke. We have to remain focused on this thing until it is done, and it’s not done yet.”