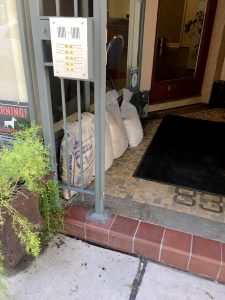 Every time it rains hard, I worry that my home might be flooding again. I was in Mid-City on Saturday when the rain began, and I quickly headed back downtown. Along the way, standing water overflowed every intersection, even after I reached the CBD – which until recently had always been a pretty dry area. As I finally approached home I could see a dutiful neighbor standing in knee deep water in an effort to slow down the wake from passing vehicles.

Just that morning, I had carefully swept away all the remaining dirt and debris from the previous week’s flooding. Now I needed to repeat the process after I cleaned up inside.  What I particularly don’t like about floodwaters is that they contain harmful bacteria that can make even healthy people sick.

Surprisingly, the July 10 storm brought more water into my building than Hurricane Katrina. Maybe that was because the path to my neighborhood catch basin – which probably has not been cleaned out in years – was blocked by construction debris left in the street by a well-meaning utility company.

Let’s face it. New Orleans’ flooding problems are a result of aging infrastructure, years of neglect and climate change. Even though Mayor LaToya Cantrell and the City Council have put together a solid plan and the capable staff needed to execute it, it will take years – perhaps more than a decade – and an additional billion dollars not yet identified to ensure our city’s homes and commercial buildings don’t flood every time heavy rainfall occurs.

Though I am not a meteorologist, I sense that hurricanes and unusual storms will become more frequent.  As citizens make more flood claims, the cost of flood insurance and already over-priced automobile insurance will probably rise. Because solutions to the flooding that have been identified are long-term instead of short-term, residents should band together to determine how to address flooding, now.

That might mean a new kind of Neighborhood Watch where a rotating neighbor is on “weather” duty, has a group text message in place up to warn property owners of approaching storms and the stop signs or barricades to close streets or slow down speeding motorists. An emergency “stash” of sandbags could also be helpful.  The notion that a police officer would ticket a speeding motorist plowing through flooded streets is just not realistic due to manpower constraints. Neighborhoods that have private security details could use those resources as well. Community policing officers and their rank should also be involved.

In the CBD, it isn’t just passing cars that create wakes but also large delivery trucks and motorcoaches. Calls made to 311 to ask that flooded streets be closed always fall on deaf ears. Businesses including hotels and restaurants and shops laden with expensive merchandise can sustain even greater damage.

Beyond cleaning out catch basins, our public officials should be involved in creating an interim plan to help minimize the growing impact of flooding on New Orleans streets. I have already urged the Downtown Development District to create such a plan for the CBD and Warehouse District. I and others will be attending their next meeting to hear proposed solutions. My sandbags are well positioned for the next weather emergency. Let’s hope they are not needed anytime soon.

On Tuesday, July 30, Sheriff Marlin Gusman is hosting a seminar entitled “Learn How to Bid on Foreclosures.” With the property tax shock many property owners are now feeling and the rising costs of new construction, renovation and insurance, readers might ask if purchasing real estate is still the way to go? Experts say that the answer is yes, especially for properties that can be acquired at below market value. If another Katrina-like hurricane blows through New Orleans, property values in affected neighborhoods will plummet while others will rise. Gusman’s seminar will take place on July 30 at 6 p.m. in Room 320 of Civil District Court, 421 Loyola Ave.  For more information visit www.opso.us.