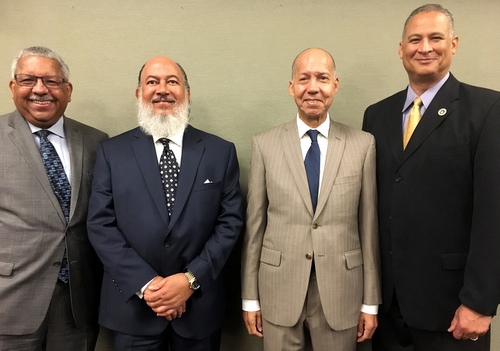 What do Judge Kern Reese, Councilmember Kristin Gisleson Palmer, Sheriff Marlin Gusman, State
Rep. Royce Duplessis, Judge Paul Bonin and Clerk of First City Court Austin Badon all have in common? Their Catholic school education helped mold them into the public servants they are today. Catholic schools have been prominent in New Orleans since 1727 when Governor Bienville invited the Ursuline nuns to establish a school and orphanage here.

What makes Catholic school graduates want to become servant leaders? “Serving the community was an important part of what the Josephite fathers drilled in us every day,” said Badon, one of dozens of current or former elected officials who graduated from St. Augustine High School. “We were also taught to stick together – that St. Aug men support each other.” Reese said St. Aug taught him not be afraid to undertake the challenges ahead. “Whatever the challenges were, we had to step up” said Reese. Reese proclaimed at one point all the male judges serving on Civil District Court were St. Augustine graduates, class of 1970.

“I especially remember the discipline instilled in me at St. Aug,” said Criminal Court Judge Arthur Hunter who mentioned the frequent use of the famous St. Aug paddle for those whose behavior was deemed inappropriate. “We quickly learned right from wrong and the spirit of activism.” Hunter also believes that St. Aug’s athletics program was designed to build leadership skills.

Former Mayor Sidney Barthelemy said that St Aug taught him the value of working to improve the lives of people. After graduating from St. Aug Barthelemy initially joined the Seminary until he realized that there was more than one way to serve the community. He began working with the clients at Total Community Action. “I came to realize that the best way to serve was to become an elected official. Barthelemy was elected to the Louisiana Senate and the City Council before becoming mayor in 1986. Among the other St. Aug men who have been elected to office include State Rep. Jimmy Harris, Constable Lambert Boissiere, Judge Herbert Cade, Judge Sidney Cates, State Rep. Royce Duplessis, Judge Michael Bagneris, Judge Dennis Bagneris, Judge Lloyd Medley, Sheriff Paul Valteau, State Rep. Louis Charbonnet and Senator Hank Braden. State Rep. George “Nick” Connor, also known as “Coach,” was the first St. Aug grad to be elected to office.

Along with Palmer – who attended Ursuline Academy – many other Catholic school female graduates have also chosen to run for office including Judge Dale Atkins, Councilmember Cynthia Hedge Morrell, Judge Piper Griffin, Judge Ethel Sims Julien, State Rep. Renee Gill Pratt, Judge Robin Pittman, Judge Tracy Fleming Davillier, Councilmember Nadine Ramsey and fellow Ursuline grad Sen. Mary Landrieu. “Ursuline’s motto is Serviam,” said Palmer. “It is incorporated into ever part of the school. All seniors have to accomplish service hours in order to graduate. Being in that environment created a service ethos in which to serve is part of everyday life for everyone. It is not special or unique or paternalistic. You serve because you should. Regardless of circumstances, we have all been granted gifts and we should share them through our service to others.”

Republican women are striking back! In an organized effort to counter the historic gains Democratic women made in the 2018 Congressional elections, almost 200 women who identify as Republicans have filed the necessary paperwork or expressed an interest in running for the House in 2020. The number of Republican women serving in Congress shrank from 23 to 13 after the last elections, according to the New York Times. Republican women in state legislatures also dropped from 38 percent to 31 percent.

Among voters nationwide, more women are registered as Democrats than Republicans. While Democratic organizations including Emerge and Emily’s List are fully engaged early in the campaign cycle to recruit, train and help women find the resources they need to be viable candidates, the Republican Party is slowly learning the wisdom of such outreach. In 2018, 35 new Democratic women were elected to Congress while only two new Republican women joined the ranks.

POOR WOMEN MAKE UP MAJORITY OF THOSE STILL SEEKING ABORTIONS

As state laws regulating abortion have become more restrictive and the number of abortion clinics continues to decrease, poor women have become the primary customers of remaining clinics. According to a report by the Guttmacher Institute, half of all women who got an abortion in 2014 lived in poverty, double the share from 1994. Overall, abortion rates in the U.S. have decreased by nearly 40 percent since the mid-1990s, according to the New York Times.

Abortions are especially hard to get in six states – Missouri, Kentucky, Mississippi, North Dakota, South Dakota and West Virginia – where only one clinic remains open. Medical and surgical abortions are available in New Orleans at the Women’s Health Care Center.