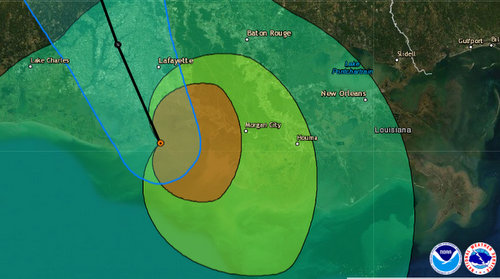 Hurricane Barry’s position, track and wind fields at 10 a.m. Orange is hurricane-strength winds, lime is winds of 58 mph or more, and pale green is 39 mph winds. (via National Hurricane Center)

The storm remained about south of Lafayette, and 50 miles west of Morgan City at 10 a.m., the hurricane center said. Its hurricane-strength winds were about 45 miles from the center, but tropical-storm winds could be felt as far as 175 miles away.

As rain bands continue to come ashore, a high risk of flooding remains, the forecasters warned.

“Life-threatening, significant flash flooding and river flooding will become increasingly likely later today and tonight as Barry moves inland, especially across portions of south-central and southeast Louisiana into Mississippi,” the forecast states. “The slow movement of Barry will result in a long duration heavy rainfall and flood threat from Sunday into next week.”

Concerns about Mississippi River levees overtopping have abated somewhat, however, as the weather service reduced their predictions for river levels on Friday evening. The river is now expected to crest at 17.1 feet on Monday — slightly higher than its 17-foot “minor” flood stage, but substantially lower than the 20 feet that the levees are designed to withstand. 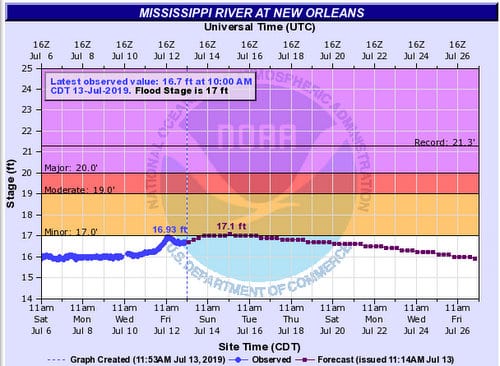