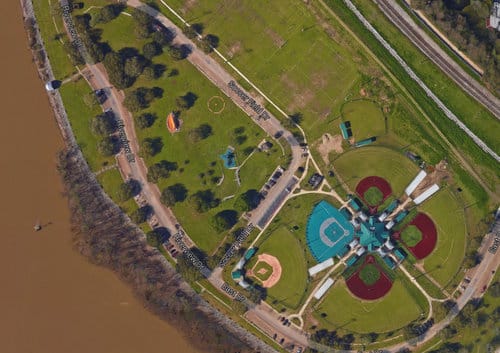 An aerial photo of the Fly at Audubon Park, 2016 (via Google Maps)

Audubon Park officials are requesting $3.5 million from the city for long-sought improvements to the riverfront park known as The Fly, including a new bicycle and jogging path, new lighting, more protection for trees and repaved road and parking areas.

The new $500,000 “multimodal” trail for bicyclists and pedestrians will run behind the soccer fields and along the railroad tracks to link what is now the entrance and the exit to the park (formally known as the Audubon Riverview), capital projects director Kyle McGehee told City Planning Commission staff on Tuesday. It will be about 10 feet wide—not as broad as the jogging path around the lake in Audubon Park, but wide enough for several bicyclists to ride side-by-side—and constructed from a semi-permeable material, McGehee said.

While the path will connect at the upriver end to the bike trail on top of the Mississippi River levee, the new section Audubon is planning will not be part of either the road or along the waterfront, McGehee said.

“Our bike path would be separate from the roadway. It would be a standalone feature,” McGehee said, because Audubon wants to remove its bicyclists and joggers from vehicles. “We want to get them into the landscape, away from traffic.” 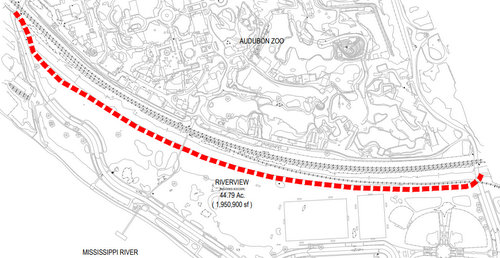 The path of the new multimodal trail for bicycling, jogging and walking on the Audubon Riverview. (via Audubon Commission)

During the creation of Audubon’s new master plan last year, planners suggested that transportation around Audubon might be improved if the street on the Riverview became two-way. While Audubon’s budget request calls for spending $1 million to repave the street and all the parking areas, the street will remain one-way for the time being, said Audubon chief administrative officer Laurie Conkerton.

The street is already wide enough to support two-way traffic, Conkerton and McGehee told the city planners, but Audubon is not ready to change the traffic flow just yet. Once construction starts on the repeatedly-delayed Magazine Street repaving in front of Audubon, however, park officials may decide to make the Riverview street two-way to allow drivers a way around the construction.

“We want to put it back the way it is now,” McGehee said. “In the future, whenever Magazine Street becomes a reality, we have to assume that that may be a bypass. We may have to have two-way traffic.”

A more permanent decision would likely require its own traffic study and planning process about the entire road network around the park, Conkerton said.

Another major part of the current budget request for The Fly is $800,000 to repair sidewalks and install curbs, and $400,000 more is dedicated to improving landscaping. Those plans will work together to protect the existing trees and better define where parking is allowed and prohibited, while maintaining a natural feel for the park, McGehee explained.

“We provide ample space to have crawfish boils and picnics and family get-togethers and reunions out there, and — in the process of having a beautified space where people can look across and have a pastoral scene — you don’t want to have too much in the way,” McGehee said. “We’re striking that strange balance of how much freedom do you have, and how much do you protect.

“We don’t want curbs everywhere,” McGehee continued. “We don’t want bollards everywhere. We want to try and weave in and out between bollards, curbs and landscaping so it’s more of a flowing approach to traffic control.”

Surveys conducted last year as part of Audubon’s master plan found that 40 percent of park users said the top priority for the Riverview was improving the lighting, and this year’s request allocates $350,000 to that, as well as the installation of new “graffiti-resistant” benches. Basic repairs to the pavilions will cost $100,000, and a final $320,000 is requested for contingencies and cost increases between now and the time of the project start.

The Audubon Commission has been asking the city to budget money for the renovations to what is formally called the Audubon Riverview for more than five years, and the project has remained fundamentally the same all along. Unlike in previous years, however, the improvements to The Fly are the only project Audubon is asking the city to fund.

Previous years’ requests also sought money to renovate the restrooms on The Fly, but Audubon has just completed that $500,000 project on its own, Conkerton said.

Also absent from the request this year is any major new stormwater drainage project. Conkerton said that Audubon is already working with the U.S. Army Corps of Engineers on efforts to reduce erosion along the Mississippi River levee, and met with Mayor LaToya Cantrell’s administration just last week about developing a more comprehensive stormwater management plan for the entire park.

Audubon’s presentation to the city planning staff on Tuesday was part of the city’s annual budgeting process, in which each city department and agency makes a formal funding request for projects for the next five years. City planners will continue meeting with agency heads this week, and deliver their recommendations on the projects to the City Council afterward.