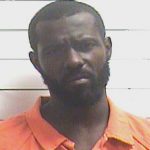 The New Orleans Police Department arrested Até Dumas, 30, in connection with two incidents that occurred Uptown near the universities.

At about 7 a.m. on June 8, NOPD Second District officers and NOPD Special Victims Section Sex Crimes Unit detectives were notified of an attempted sexual assault that reportedly occurred at Audubon Park that morning.

Through investigation, detectives learned that a female victim was leaving a restroom at the park earlier that morning when a man allegedly attempted to sexually assault her. The victim reportedly escaped and fled the area before contacting police.

During the investigation, detectives learned that a suspect in an unrelated aggravated assault incident at Audubon and Green streets that same morning matched the description given by the victim in the June 8 sexual assault incident.

The individual, later identified as Dumas, was located and detained at Fountainbleau and Audubon streets. Before he was detained, Dumas reportedly fled from officers on foot and struck an officer in the face with a closed fist.

Detectives determined Dumas to be a suspect in both incidents and obtained warrants for his arrest. Dumas was arrested and booked into the Orleans Parish Justice Center for attempted first degree rape, aggravated assault, battery of a police officer and resisting arrest.