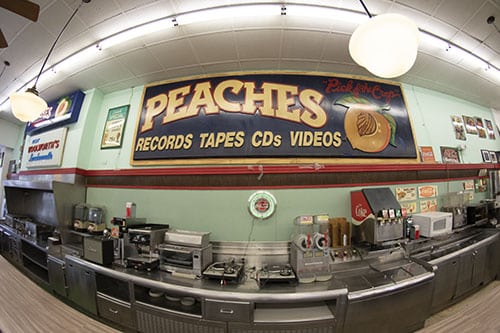 The vintage lunch counter in the Peaches on Magazine Street was part of an F.W. Woolworth’s store at the site. (Zach Brien, Uptown Messenger)

Peaches Records operators clarified how they plan to use their conditional use approval to operate as a restaurant and serve alcoholic beverages Monday, June 3, at a Neighborhood Participation Program meeting.

Peaches Records previously told the Uptown Messenger it would operate the historic Woolworth’s lunch counter in their Magazine Street location as a daily restaurant.

Peaches says any daily operation is three to five years in the future. For now, the operators would like to use food and beverage service at the counter to host fundraisers and pop-ups featuring local chefs of different backgrounds and experience levels.

Peaches Records previously ran a cafe out of a French Quarter location, one that Rea said was not often utilized by Peaches customers.

Rea pointed out that, considering the the difficulty of selling CDs and vinyl records in today’s world of music streaming, the ability to sell alcohol will open up new avenues for revenue.

However, this will not be a late-night establishment, Rea said. Peaches is asking for approval to sell food and beverages during normal business hours, 10 a.m. to 7 p.m.

Community member Linda Mathies said she is worried that, if Peaches Records left the building, the next business would inherit their alcohol and beverage license and open a late-night bar.

Another community member, Fye Lieder, expressed concern that the area was already “oversaturated” with bars and restaurants. She said there are already 22 different food and beverage outlets in the five blocks around Peaches Records.

Peaches reaffirmed to Lieder they will not run a daily restaurant in the near future.

Though there was resistance, all attendees liked the idea of having a counter where they could take kids to get ice cream and snacks. One attendee said she was disappointed when she learned this was not part of the immediate plans for the vintage counter.