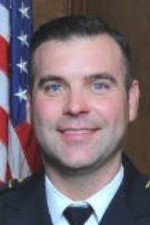 The newly-appointed commander of the Uptown-based Second District of the New Orleans Police Department will introduce himself to residents next week in an event at the station on Broadway Street.

Commander Jeff Walls, a 22-year NOPD veteran, was named to lead the Second District succeeding the previous commander, Doug Eckert, who died last week after a battle with cancer. Walls led the lakefront’s Third District prior to this appointment, and previously the French Quarter’s Eighth District, as well as the department’s homicide unit.

“Commander Walls has received several letters of commendation, a medal of achievement and two medals of commendation,” according to a NOPD news release. “He has an associate’s degree in Criminal Justice from Bishop State (Ala.) Community College, a Bachelor’s in Criminal Justice from Loyola University-New Orleans and a master’s degree in Homeland Security from Tulane University.”

Walls will meet with Second District residents at 6:30 p.m. Tuesday, June 25, at the district station at 3401 Broadway Street. 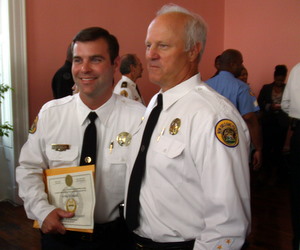 Commander Jeff Walls (left) and former Commander Bob Bardy of the Sixth District congratulate one another during a promotions ceremony in 2011. (UptownMessenger.com file photo by Robert Morris)

Residents of the NOPD Sixth District — which covers the Garden District, Irish Channel and Central City — will likely remember Walls from around 2010 and 2011, when he led investigations under former Commander Bob Bardy and served as a frequent point of contact with the public.

“It has been and will continue to be an honor to serve the citizens of New Orleans,” Walls said in the news release. “Having previously worked as a Task Force Officer and a Detective in the Second District I am excited to be back. I am looking forward to working with the residents of the Second District to address their needs and concerns.”