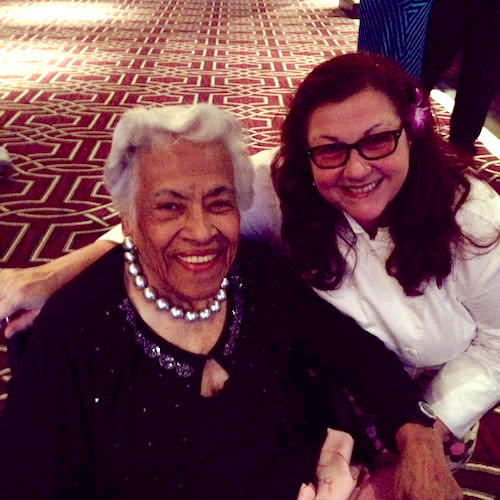 Leah Chase and Mary Sonnier at a Chase Family Gala in June 2014. Sonnier was the pastry chef. (courtesy of Mary Sonnier)

New Orleans always reels when it loses one of its greats, but then we count our blessings and reminisce. Ours is a community with a collective memory, and heart.

We all loved Leah Chase. And we will all miss her. Greatly. Now comes the time where we share our stories over the fence and on the front porch.

To those who had the luck to meet her, or better yet to really know her, Leah Chase was one of kind. She was our very own Queen of Creole cuisine.

She cooked for presidents the same way she cooked for family and guests in her kitchen. Her legacy and influence will be felt long after we can no longer turn around and see her smiling face and sparkling, sharp eyes. Oh, not much got by those eyes.

Miss Leah was a powerhouse, a legend long before I learned how to cook, or even before I was born. Miss Leah was what I called her – with whispered reverence.

I first met her in the cheese department of Dorignac’s, ages ago, presidents ago. There she was; tiny, perfectly coiffed, and wearing her pristine chef’s coat. I was in awe. I was also lost.

With a raised brow and well-directed pointed finger, she taught me how to pick out my first cheeseboard and accompaniments. I listened, and I also took notes on the handle of my grocery cart, just as I was told. I said “Yes ma’am” a lot.

Miss Leah wasn’t going to let me mess up my first cocktail party, and she didn’t.

Leah Chase touched lives, and she lifted others – especially women and minorities. She influenced our city, our culture, our food, and even the world.

One life she touched was that of local Chef Mary Sonnier.

Sonnier was a close friend, a colleague, and a fan of Leah Chase. Sonnier describes her as not only the Queen of Creole Cookery, but as wife, sister, mother, daughter, aunt, grandmother, friend, businesswoman, activist, community leader, patron of the arts, philanthropist — and a beautiful soul.

In the short interview below, Sonnier shares almost three decades of memories of her friend Chef Leah Chase: 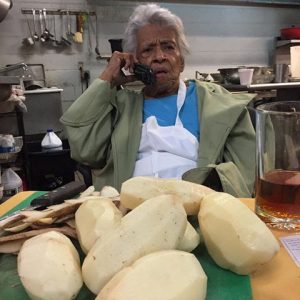 What do you feel is Leah Chase’s legacy in NOLA beyond food?

“I hope it will be not only her cookery but how she brought people together with it. People from all walks of life and all races.”

What do you hope is her legacy in the black community?

“She and Dooky should be recognized for their contributions to the civil rights movement. They were not afraid to give a safe place to those who needed it at that time. They nourished both their bodies and souls.”

Can you share how and when you first meet Leah Chase?

“Mrs. Chase and I first met in 1992 when we were working on a charity event for the Metropolitan Battered Women’s Shelter called ‘The Women Chefs Show Off.’

“Women chefs were still quite a novelty back then, so Susan Spicer invited me to join the group. We would come up with a theme, a gourmet menu, and together we would all produce the dinner.

“Mrs. Chase was our leader, but she never told anyone what to do; instead, she liked hearing ideas from us, the younger chefs, and she was very supportive.

“There were usually about 350 guests. We created four to five courses with wine pairings. There was an award given to the chef who they felt made the biggest contribution to the organization, called ‘Leah Chase Silver Spoon Award.’ I was honored to be the recipient in 1998.”

How would you describe your relationship?

“Our relationship was only professional in the beginning; I was in awe of her.

“Over the years, as we worked on other charity events — some in other cities — we became friendlier. She admired my dessert-making skills because that was something she never really mastered. I admired her for her generosity and work ethic.

“As the years went by, and especially after Hurricane Katrina, we really became friends. We spent some time together in Greenwood, Mississippi, where we were all evacuated. I saw how determined she was to come home and reopen her restaurant. She wanted to do it because she felt like her community needed her.

“It was after we returned to New Orleans, after the evacuation, that I would stop by their restaurant, Dooky Chase. I’d visit, spend time with her and her husband, Dooky.” 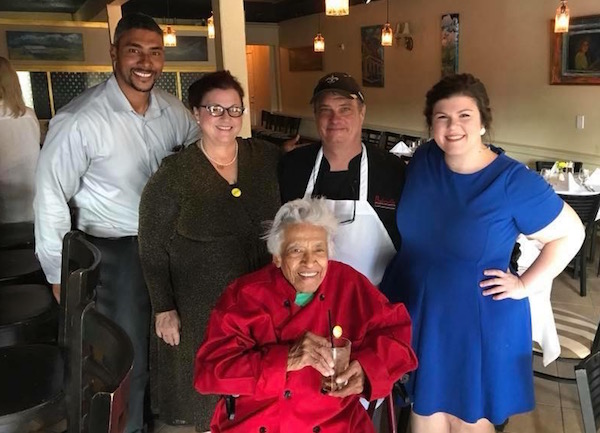 How did you contribute to recording her history?

“I also had volunteered at WRBH Reading Radio; I had a radio program called ‘The Chef Show.’ She agreed to be interviewed but had no ride, so I picked her up and brought her to the station. That is also when I convinced her to come back and read/record her biography.

“I just thought it would be amazing to hear about her life in her own voice. It took five trips to the station, every Wednesday afternoon for five weeks. I picked her up, many times with my kids in tow, brought her to the station. She would read for an hour straight through. No easy task for anyone, much less someone 85 years old at the time.

“She also was kind enough to read a children’s Christmas book for that series, ‘The Littlest Angel.’ She always loved seeing my kids, especially Gigi, who was very young at the time and would often paint or draw a picture for Mrs. Chase. Mrs. Chase would have a shrimp po-boy waiting for Gigi when we would drop her back off at the restaurant.”

What do you feel you shared as women, friends and chefs in New Orleans?

“We were colleagues, girlfriends, women who liked to chat about how we managed our lives, kids, husbands. And we talked about food!

“I felt like I could really talk to her comfortably about most anything. She encouraged Greg and me to never give up on our dream of reopening our restaurant and she even accompanied us to a City Council meeting for a zoning change. She spoke on our behalf. Mrs. Chase was a real friend.”

How did she inspire you and lift you as a female chef?

“I admired the fact that she didn’t let other chefs that we sometimes had to work with (men) push her around for stove space, prep space, etc. She would always encourage me to do the same, no matter how famous they were! She wanted us all to be the best and succeed.”

Can you describe the first time you cooked with her? What were your favorite dishes of LC?

“Well, I love her fried chicken and gumbo z’herbes of course, but she would sometimes cook a whole fried catfish that I really loved. Her veal stew was also amazing. And shrimp Clemenceau.”

Can you share some cooking techniques she shared with you?

“Grinding the greens for gumbo z’herbes; using an uneven amount of greens.

“She also showed me what elderflowers are! They grow wild, mostly on the side of the highway, all over the South. She told me her mother would make a soothing syrup for sore throat or cough from the flowers, so I did the same. It’s delicious. Years later I discovered it was a hip new ingredient in craft cocktails.”

How do you see the future of Dooky Chase without Leah Chase?

Mary Sonnier would like all of us to listen to Leah Chase read her biography aloud, and it sounds like a fine idea, that and reserving a table at Dooky Chase.

“Listen, I Say Like This,” the Leah Chase biography by Carol Allen will air on WRBH reading radio, June 17t at 10 a.m. and 5 p.m. You can also stream the show online at WRBH.org.

Dooky Chase is located in the historic Tremé district and continues to serve Creole cuisine cooked by the Chase family. Her family will continue the tradition and cook on!