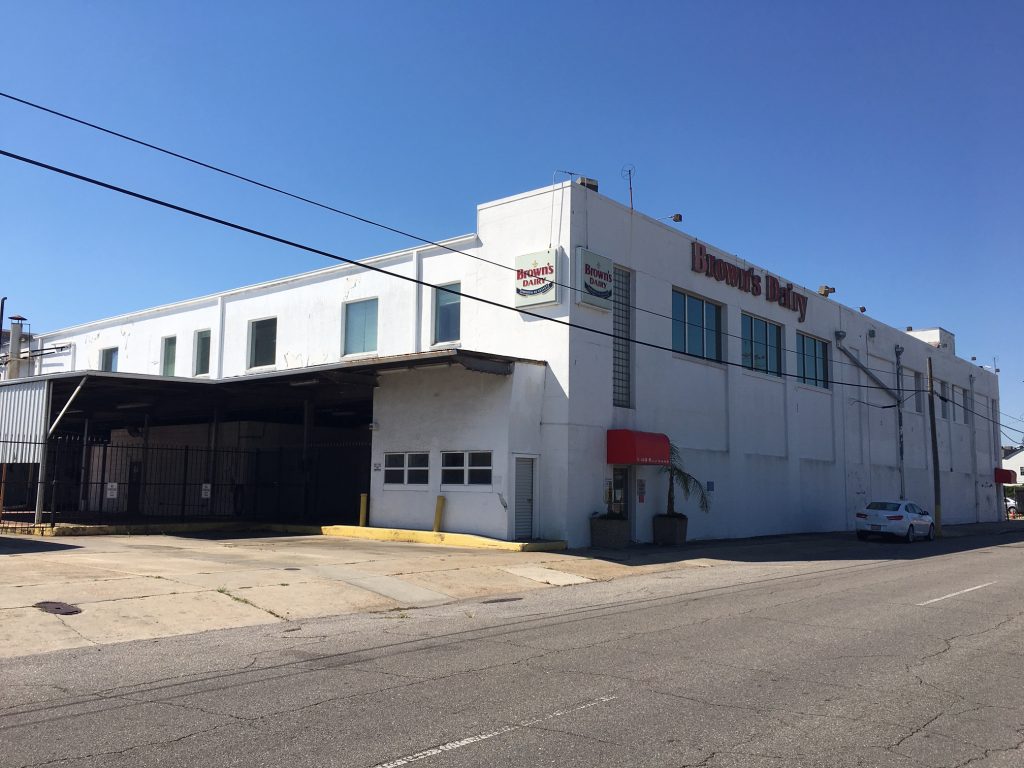 The former Brown’s Dairy complex has gone on the market. (Danae Columbus)

Local and national real estate developers are excited by this week’s announcement that the former Brown’s Dairy complex — just uptown of the Pontchartrain Expressway and one block off St. Charles Avenue — is now for sale. According to listing agent Matthew Eaton of Re/Max, this 200,000-square-foot parcel presents the largest infill development opportunity to hit the New Orleans market in recent years.

With a hefty price tag of $8.5 million (approximately $42.50 per square foot based on land area), potential developers will be crunching the numbers to see what types of adaptive reuse could turn a profit. Regardless of whether the complex is redeveloped as retail shops, restaurants, art galleries, micro-breweries, recording studios, sports or entertainment complexes, apartments, condos, hotels, short-term rentals or some combination of the above – the sale will permanently change land uses and property values for many surrounding blocks.

Advocates of affordable housing might also consider the site desirable, especially if the city would provide a cash subsidy or significant tax incentives. Dean Foods, the site’s current owner, will subdivide the complex if necessary to accommodate various uses and buyers.

Originally known as Faubourg Lafayette, this neighborhood began a renaissance almost 20 years ago when astute developer Greg Clayton assembled numerous parcels for Albertsons to open a grocery store. (The store was quickly shelved after Walmart announced it would build on Tchoupitoulas Street). The pace of redevelopment accelerated in the years immediately following Hurricane Katrina. Today anchors, including Central City Bar-B-Q, the Ashé Cultural Center, the New Orleans Jazz Market, Iberia Bank and the National Food and Beverage Museum, have breathed new life into the area.

For decades Central City has been an affordable neighborhood for African-American residents. The NAACP has historic roots there. Dryades Street (now Oretha Castle Haley Boulevard) was a major shopping thoroughfare with dozens of bustling stores and an open-air market. The Brown’s Dairy redevelopment will create further gentrification and change the traditional residential mix. It could also drive out some long-time renters. The Muses, a mixed-income apartment complex, currently provides the highest concentration of affordable living units in the area.

Listing agents formulated two prospectuses for the site – one that highlights mixed-use redevelopment and a second prepared for hotel investors. Without a zoning waiver, the site could accommodate a 550-room hotel. There is already a successful Quality Inn less than one block from the site. Hospitality industry real estate broker Lenny Wormser believes the site is not appropriate for a major hotel chain such as the Marriott, whose development costs are in the range of $450 per square foot including land. More affordable hotel chains such as the Comfort Inn could build out the site for $150 per square foot or even less, Wormser said. Even at $150 per square foot, development costs could reach $30 million, a previously unheard of budget for any Central City construction project. The city could approve a height variance perhaps in exchange for new affordable housing offsite.

Many hotel officials believe the New Orleans market is reaching its saturation point. Several thousand new rooms have been added in the past few years and additional projects — like the Convention Center hotel and the former World Trade Center — are in the works. As more hotel rooms have come on line, occupancy has continued to increase. A new study presented this week indicated that, perhaps for the first time, hotel occupancy in New Orleans may be peaking. Yet it would take a developer three to five years to get the Brown’s Dairy site designed and built. By then, the market might support another 500-plus rooms.

Benjamin Christian Brown came to New Orleans from Ontario, Canada, 115 years ago. In 1905, he established Brown’s Velvet Ice Cream Company at the corner of St. Charles Avenue and Polymnia Street with one freezer and an old gray mare to steer the wagon. The company’s four employees used crushed ice and rock salt to hand-crank their ice cream.

In 1917, Brown constructed a brick plant at the intersection of Baronne and Thalia streets that could hold 5,000 gallons of ice cream. By 1950, the company was producing 10,000 gallons of ice cream each day and was also selling milk to wholesalers. Brown’s Velvet Dairy eventually became Brown’s Dairy and then part of Deans Foods Southwest Division. They merged with Barbe Dairy in 2004 and closed the New Orleans operations after opening a new plant in Hammond in 2016.

Travis Hill NOLA, formerly the Youth Study Center, works with juveniles who are incarcerated. It will be hosting its first fundraiser Wednesday, June 19, at 6 p.m. at Capulet, 3014 Dauphine St. Tickets begin at $50 and can be purchased online through Eventbrite. The fundraiser is being promoted as an opportunity to help paint a mural, write and share a poem, and design your own swag while also pledging to reduce incarceration.

The school was named after local trumpeter Travis Hill, who was incarcerated as a teenager. It serves juveniles and other individuals up to 21 years of age who have not completed their secondary education.

First-time legislative candidate Anthony Jackson will hold a community conversation on economic development and crime tonight, June 13, at the Half Shell on the Bayou, 2517 Bayou Road, from 5:30 p.m. until 8:30 p.m. Jackson is running for State Representative District 100 in eastern New Orleans. The seat is being vacated by John Bagneris, who has announced for the state Senate. Civic activist Jason Hughes is also running for HD 100.

The ticket price for the Travis Hill School was corrected in this story. Tickets begin at $50, not $500.