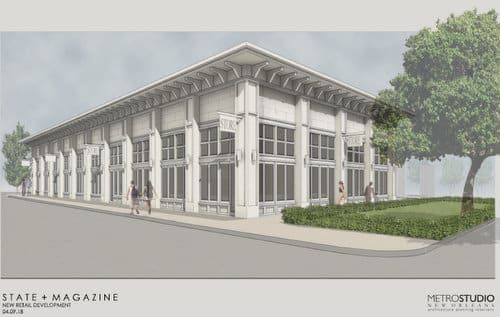 An architect’s rendering of the retail development planned for the corner of State and Magazine streets. (Courtesy of Sherman Strategies)

Construction began on a new building at 6001 Magazine St. on Monday, June 3. The site will soon be home to four retail spaces, including a coffee shop, as soon as the end of this year.

At a neighborhood meeting at Reginelli’s Pizza across the street from the construction site, developer Clay Cambre invited neighbors to engage with the redevelopment team and learn about the project’s progress at two Neighborhood Participation Program meetings on June 3 and 4.

The new building will stand about 24 feet high, and will include a 17-space parking lot behind the structure, although the city did not require the additional parking.

Attorney Michael Sherman said adding parking has been a repeated request from neighbors, as parking spaces are in high demand in the uptown stretch of Magazine Street.

The building will be home to four retail spaces, all roughly the same size.

Three out of the four spaces already have tentative tenants — the anchor space, on the corner of State and Magazine streets, will house a coffee shop, potentially a Starbucks, and other spaces are expected to house a juice or smoothie bar and a boutique fitness studio. SRSA Commercial Real Estate is the leasing agency for the site.

The design will include some stormwater management features, such as permeable surfacing and on-site water retention, as well as new shade trees.

The building has cleared all hurdles to approval; however, the parking lot must go through the conditional use process. This is because the parking lot will be on land that was technically a separate parcel from the building site. Hence, the NPP meeting at the pizza joint across the street. 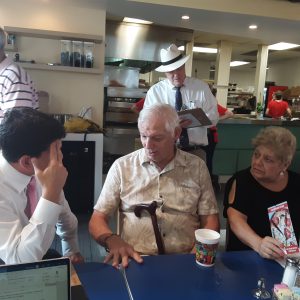 “It’s one of the quirkiest zoning issues that I’ve seen in a long time,” Sherman said. The team will also attend the Audubon Riverside Neighborhood Association board meeting tonight.

The issue is scheduled to go before the City Planning Commission on July 23, and then, assuming it moves forward, to the City Council on Aug. 22, Sherman said.

For some, the shift to more retail space in an area that already has a glut of high-end businesses was a loss for the area.

“I miss my gas station,” said Jeanny Keck, who has lived in the area for more four decades. She attended the meeting with Bill Keck, her husband.

However, some viewed the development more positively.

“I’m glad that they’re finally doing something as opposed to keeping it an empty lot,” said Demitri Celis, a manager at Reginelli’s who has worked for the pizzeria since 2012. He said he’s also happy that the developers are adding parking spaces.

“It’s better than having an empty lot, and in the end it will bring more people to the area,” Celis said, adding that he’s “not too keen on it being a Starbucks,” instead of a local business. Sherman said that the corner space will “probably” be a Starbucks.

According to the development team, construction is expected to finish in October, at which point the spaces will be turned over to tenants to do interior work for their respective shops. The grand openings are expected sometime around New Year’s.