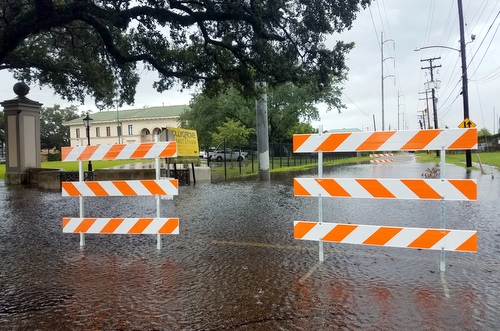 From the New Orleans Office of Homeland Security and Emergency Preparedness

Residents are encouraged to prepare for heavy rainfall and potential flooding through Friday, June 7.

Numerous showers and thunderstorms are expected across the New Orleans region through Friday, some of which could cause heavy rainfall leading to ponding of water in low-lying areas and areas of poor drainage.

Rainfall totals between 2 to 6 inches are expected across the area with locally higher amounts possible through Saturday afternoon. The greatest threat of flooding in the metro area is currently forecast to be on Thursday, June 6, with a “Slight” to “Moderate” risk of excessive rainfall, according to the National Weather Service. A Flash Flood Watch will be in effect in New Orleans tonight through Thursday evening.

The New Orleans Office of Homeland Security and Emergency Preparedness is monitoring the weather and is in close communication with the National Weather Service. The Department of Public Works has and will continue to clean and unclog catch basins, as well as flush drain lines in flood-prone areas.

The Sewerage & Water Board is preparing for the incoming weather. The drainage system has 116 out of 120 pumps available for service, as well as all five turbines, frequency changers and other redundant power sources, such as the Electro-Motive Diesel generators. Pump stations will be fully staffed and the operations team will be prepared to respond to the rain as circumstances dictate.

Parking restrictions on neutral grounds and sidewalks will be suspended beginning at 6 p.m. today and will remain suspended until 10 a.m. on Friday, June 7.

Residents are reminded not to block intersections or streetcar tracks. To reduce risk of street flooding, do not park in front of or on a catch basin.

Residents are also encouraged to prepare homes and neighborhoods for heavy rain by removing debris from gutters and downspouts and cleaning in front of catch basins to help rain get to the drain. Call 311 to report catch basins that are not fully functioning. Residents should avoid lifting a catch basin lid or inserting anything into a catch basin.

During heavy rain, drivers should use caution around areas prone to significant street flooding, like streets under bridges and overpasses. The New Orleans Police Department will ticket motorists who drive faster than 5 miles per hour on streets with standing water.

Due to the potentially severe danger that could result from high water, residents should call 911 to report street flooding and life-threatening emergencies. Reports of street flooding are shown in real time at streetwise.nola.gov.

Stay up to date by signing up for NOLA Ready emergency alerts or by following on Twitter @nolaready. To get text alerts, text your ZIP code to 888777 or go to ready.nola.gov/alerts.