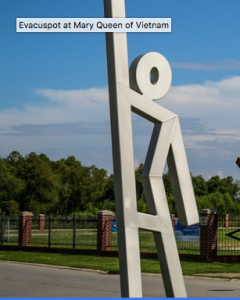 The city’s evacuation spots are marked with this 14-foot statue.

The city has a new evacuation plan in place for the 2019 hurricane season, which begins today and runs through Nov. 30.

For the fifth year in a row, the season got ahead of itself, however. On May 20, the first named storm of the year, Subtropical Storm Andrea, formed in the Atlantic near Bermuda, according to the National Hurricane Center.

As New Orleanians know, it only takes one. So the city puts in place each year an evacuation plan, a last-resort option for residents otherwise unable to leave during a mandatory evacuation ahead of a major hurricane.

“It is important to remember that this plan is an option of last resort, but we do know our responsibility as a city in making sure that we can accommodate the needs of our people,” Mayor LaToya Cantrell said in a press release. “Priority will always been given as it relates to individuals who need evacuation assistance due to transportation, financial and/or medical needs.”

The city encourages all New Orleanians to remember that the first line of defense against a disaster is personal preparedness. Learn more about getting ready for hurricane season at ready.nola.gov/hurricane and sign up for emergency alerts by texting your zip code to 888777.

As the season begins, gather items you will need in case of an evacuation in a portable, water-proof container: identification, cash, list of emergency contacts, medical records and prescriptions, birth and marriage certificates, insurance polices and documents that prove where you live.

For the 2019 season, city officials also announced a significant change to the evacuation plan. The Smoothie King Center is now the Orleans Parish City-Assisted Evacuation processing site in place of the formerly used Union Passenger Terminal.

As the population of New Orleans continues to grow — including the small subset of individuals estimated to need evacuation assistance due to transportation, financial, or medical needs — the city began to seek alternative venues better suited for growing evacuee numbers.

Officials began to develop a plan to use the Smoothie King Center in the summer of 2018 to finalize it for the 2019 hurricane season. The city estimates that use of the new processing location will nearly quadruple the throughput, or number of people that can be evacuated at one time, during a mandatory evacuation. Additionally, the Smoothie King Center better accommodates individuals on the Special Needs Registry who may have medical or mobility equipment and may require additional assistance, the Mayor’s Office said.

The change in processing venue does not change how evacuees will access the evacuation program. The sites of the 17 evacuation pickup points — or “evacuspots” — remain the same. Each is marked by a 14-foot metal statue resembling a person hailing a bus.

Evacuees using the City-Assisted Evacuation program during a mandatory evacuation should go to their nearest evacuspot to be brought by Regional Transit Authority bus to the Smoothie King Center for processing and transportation to a state- or federally-run shelter. Five of the evacuspots have indoor areas specifically designated for the elderly or people with minor medical or mobility needs.

Locations of the 17 evacuspots are listed below. Additional information and an interactive map are available at ready.nola.gov/evacuate.

Residents with access or functional needs preventing them from physically getting to an evacuspot may be eligible to be picked up from their home by a paratransit vehicle or other accommodation through the City’s Special Needs Registry, run by the New Orleans Health Department.

Residents who cannot evacuate on their own and who use life support systems, have trouble walking, are blind or deaf, are on dialysis or have intellectual or mental health disabilities should call 3-1-1 or go to specialneeds.nola.gov to sign up for the Special Needs Registry. Health Department staff will help these individuals determine the best evacuation plan based on their needs, which could include special transportation and sheltering at a Medical Special Needs Shelter.

The city estimates that between 35,000 and 40,000 people may need help evacuating before the next major hurricane. A nonprofit group, Evacuteer, formed after Hurricane Katrina to “make sure that no one is left behind again.” It recruits, trains and manages volunteers to assist in New Orleans’ public evacuation efforts.