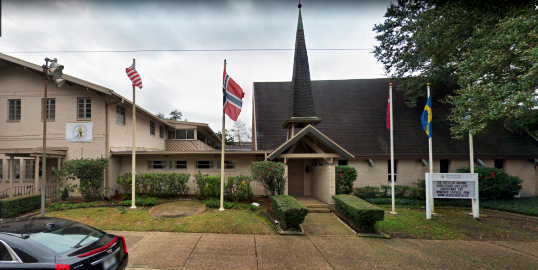 The former Norwegian Seamen’s Church, also called the Scandinavian Jazz Church, on Prytania Street will be turned into a wellness center. (via City Planning Commission)

The City Council last week approved the zoning change that will allow a wellness center in the former Norwegian Seamen’s Church, while promising to add some requirements for the business and property owners.

The wellness center will be owned and operated by three sisters, Diana Fisher, Deborah Peters and Kendall Wininger, who are Lower Garden District residents. It will include offices for physicians and therapists, a health club with fitness classes in the former chapel and in the outdoor pool, and a carryout health-food restaurant.

District B Councilman Jay Banks said the City Council is adding two provisos to the ordinance allowing the zoning change from residential to mixed-use, permitting a commercial venture. One will require the owners to submit a parking plan; the other will prohibit them from acquiring a permit to sell alcohol at the site.

“We want to give the neighborhood as much assurance as we can that this will not be burden,” Banks told Uptown Messenger.

Off-street parking is not required under the city’s master plan for zoning and was not among the provisos from the City Planning Commission, which include mandates to submit plans for other components of the development such as landscaping, lighting, signage, trash management and bicycle parking.

The center is already in compliance with the city’s parking requirements, according to a report from the City Planning Commission staff.

“Per Article 22, Section 22.5.A Exemptions from Vehicle Parking Requirements the first
5,000 square feet in gross floor area for commercial uses in the HU-MU District are exempt
from vehicle parking requirements,” the CPC staff report states. “Further, per Article 22, Section 22.5.B, on-street parking spaces located along the front or side property line may be counted towards required off-street parking spaces for commercial uses.”

The church, later called the Scandinavian Jazz Church and Cultural Center, and its adjacent housing units were required to provide 48 spaces, staff noted, and that requirement is grandfathered in for the wellness center. With two spaces available in a garage on Urania Street and the on-street spaces, that parking requirement is exceeded, the CPC staff notes.

The staff, however, expressed concern that the medical clinic and wellness center will be drawing people from outside the neighborhood, and the zoning it will be under is primarily for those businesses serving the surrounding area.

The owners say they will be serving the Lower Garden District. “This project is primarily designed for and with the neighborhood in mind,” co-owner Deborah Peters told the commission. “We are community builders and want this to be for the community.”

Although the project has been enthusiastically embraced by its Lower Garden District neighbors, parking has been a concern throughout the approval process. The medical clinic in particular is likely to draw people from other parts of the metro area, who will be driving to the center.

The parking impact was brought up at a neighborhood meeting in April, although the proposal was positively received overall. Parking was also discussed at a Lower Garden District Association board meeting, before the board unanimously voted to support the wellness center proposal.

At that time, the owners’ land-use attorney Avery Foret told the commission they recently counted 72 spaces within one block of the former church.

The owners said they have been working on a plan to get off-street parking for their development. “We have reached out to different people to come up with a plan to make enough parking,” said co-owner Kendall Wininger.

Banks also did not want the center to have a negative impact on the Dryades YMCA, which provides some of the same services as the proposed wellness center, such as a gym, fitness classes and a pool. The wellness-center owners met with Dryades YMCA representatives to assure the two organizations are cooperative rather than competitive, Banks said.

“There’s a tremendous need for health and wellness in the community,” Banks said. “We want to make sure that need is met.”

The zoning change and conditional use that will allow the wellness center to operate, with provisos from the council and the CPC, was unanimously approved by the City Council.