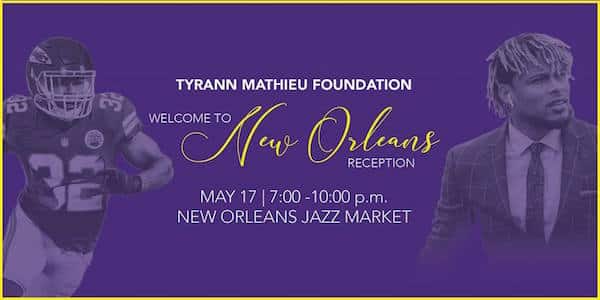 New Orleans native and NFL Pro Bowler Tyrann Mathieu will host the 2nd annual weekend of events benefiting his New Orleans-based nonprofit. The weekend kicks off with a soiree at the New Orleans Jazz Market Friday, May 17, and features a Celebrity Kickball Classic on Saturday, May 18. 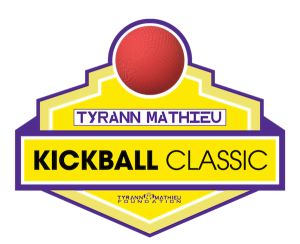 The Tyrann Mathieu Foundation, a nonprofit organization with the mission “to impact the lives of financially disadvantaged children and youth through encouragement, opportunities and resources to achieve their dreams in Phoenix and his hometown of New Orleans.”

A first-class party with a purpose as Mathieu invites fellow NFL athletes, celebrities and influencers to help raise funds for his foundation. The event will feature a number of staple New Orleans restaurants in their “Taste of New Orleans” experience including Bonnet’s, Morrow’s, Neyow’s, We Dat’s, and By Culinary Design, among others. Entertainment will be provided by Kevin Stylez, and Assata Rene, recent American Idol sensations that represented Nola in 2019. Net proceeds from the event will go to the Tyrann Mathieu Foundation.

On Saturday, May 18, Mathieu hosts his Second Annual Celebrity Kickball Classic at the Shrine on Airline Stadium in Metairie. Mathieu invited current and former NFL athletes, notable LSU alumni, New Orleans natives and celebrities across sports and entertainment to join him on the field for a fun-filled afternoon with the New Orleans community. Net proceeds from the event will go to the Tyrann Mathieu Foundation.