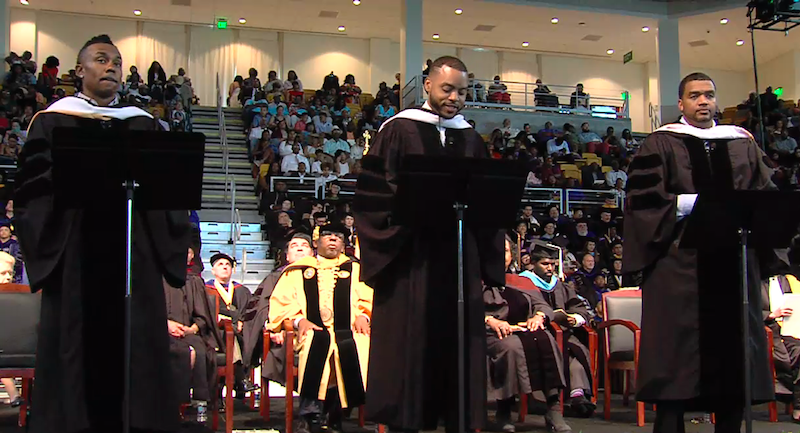 For decades, Xavier University has ranked first in making African-Americans into medical professionals. This status led three young men to study at the university twenty years ago.

They all returned to Xavier for its 2019 Commencement on Saturday, May 11, to give the keynote address and receive Doctorates of Humane Letters conferred by the University President Dr. C. Reynold Verret.

According to the university, “Xavier is a nationally recognized leader in the STEM and health sciences fields, producing more African American students who graduate from medical school each year than any other university in the United States.” All three men note this as their reason for coming to the New Orleans institution.

Dr. Pierre Johnson made it from Chicago to New Orleans. He knew he wanted to be a physician at nine years old when his mother was pregnant with his brother—the physiology behind childbirth intrigued him. He enrolled at Xavier because it was a clear opportunity to succeed far away from home.

Dr. Joe Semien, Jr., from New Orleans, went to the military after high school. He knew he wanted to be a physician, so the prestigious medical university in his hometown was an easy choice.

Dr. Max Madhere grew interest in Xavier when he volunteered at Howard University’s hospital near his high school, which required 200 hours of volunteering. “I saw successful African-Americans in leadership and positions of power, being actively involved in the community. It was true representation for people of color in the medical field,” Madhere said. 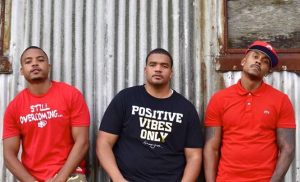 Drs. Johnson and Madhere met when they were both struggling academically. “It was divine intervention,” Madhere said. “We were all completely failing. It was one of the lowest points of our academic careers. We opened up to each other in the library at Xavier. We were open and honest with each other, and we all had the passion and determination to succeed.”

Dr. Semien soon joined, and the duo became a trio. They mirrored each other, kept each other accountable, and together, became an unstoppable force. Three peers found the support in each other that pushed them all to finish undergraduate school, the MCAT, and medical school.

During their speech, the doctors repeated a statement in unison: “Keep grinding, we got this.” The phrase kept them focused, motivated, and unyielding throughout their obstacles.

“20 years ago, all three of us were young brothers at this same institution that were lost and trying to find our way through this thing called life,” said Dr. Semien during commencement. “Now, 20 years later, we stand before you trying to pay our blessings forward. You can’t tell us that God isn’t great and God isn’t real.”

In hindsight, their college experience and being at Xavier, an HBCU, was invaluable. “If we didn’t choose the right institution, knowing how this game is played, when you’re at a disadvantage and you’re just a number, you’re easily dissuaded from pursuing this career,” Madhere said in an interview. “What benefitted us at Xavier, was the institution and the environment. The courses were rigorous but not biased. People believed in you, and every resource was there for you to succeed and help you in whatever fallbacks you had.”

Despite going to different medical schools and settling in different cities, the three remained a close trio. “It’s easy to stay connected when you’re best friends, almost 20 years,” Madhere said in an interview.

The Pulse of Perseverance 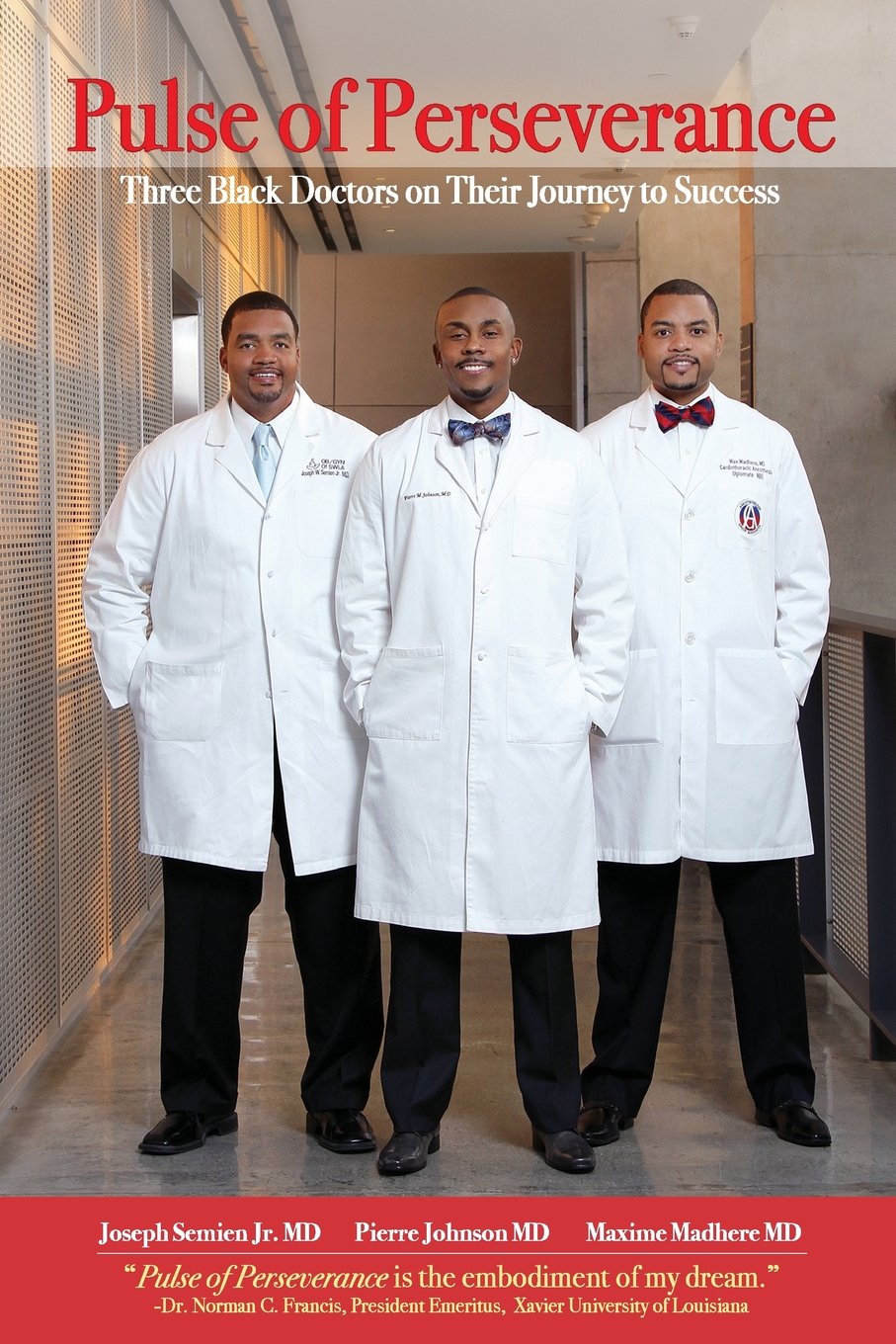 The cover of “The Pulse of Perseverance” (via Amazon.com)

The three men became successful after overcoming adversity, but felt a need to pay it forward and share what they learned. In January 2018, they a co-authored the book “Pulse of Perseverance.”

As their website states, “Pierre, Max and Joe want to share their story of friendship and perseverance to show young, black men that athletes and entertainers are not the only examples of black achievement and success.”

“We achieved our dreams of being physicians, yet we still see the plight of black people suffering. It still doesn’t sit well,” Madhere said. “With our fortune we thought, what better way to tell than narrative of what black boys have to go thru by writing a book?”

Dr. Johnson said the book is a tell-all story of their lives. It is designed to serve three purposes. The first purpose is inspiration. The second is as a blueprint for underrepresented kids to recognize the obstacles they will experience on the road to success–how to stay focused, how to cope with depression, and the like. The third purpose is to stress the importance of reaching back and never forgetting the road you had to overcome once you get to your desired level of success.

Johnson added, “It’s a segue to a call of action: who we are, how we did it, and here are the steps to defeat the beast. There’s more to life than what you accomplish, like being satisfied with the things you see.”

The trio lives this sentiment by giving scholarships, going to schools and giving their contact info after speaking engagements, and role modeling. Their Pulse of Perseverance Scholarship is awarded to a student applicant every month, and a 2019 graduate was their May scholarship winner.

Drs. Madhere, Semien, and Johnson were called to their alma mater to spread their knowledge to Xavier’s Graduating Class of 2019.

When asked about being keynote speakers for their former college, Johnson said: “It’s surreal. Time passes by so quickly. Time waits for no man. From long nights of studying, now high levels of success. It’s nostalgic, surreal… we’re excited, blessed and thankful.”

Madhere echoed the sentiment, adding, “20 years ago, we were lost brothers working our way through life. Now, we have fulfilled our dreams, we’re impacting lives in tangible ways. It’s indescribable.”

During the commencement speech, Johnson said, “Xavier provided disadvantaged kids like us a safe, intellectual space so that we were afforded the opportunity to thrive. Pulse of Perseverance couldn’t give thanks to this institution enough.”

Dr. Semien made sure to highlight their commencement address by stressing this: “Do not allow any person or thing to place limitations on you. When the pen is in your hand, you control the narrative, not them. So, don’t give anyone the ultimate power to write your story.”

See the Commencement video at the 57-minute mark for the trio’s introduction and around 1 hour and nine minutes for their speech. Find out more about them, their philanthropy, and book at thepulseofp3.com.